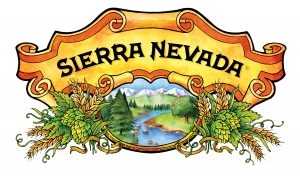 1980 was a low point in the history of the US for breweries, according to the Brewer’s Association, there were only 92 breweries in operation which seems like nothing compared to 6,372 in 2017.  The reason being was the big dogs of Anheuser-Busch, Coors, and Miller had taken over the market share with their Lagers and light beers which slowly forced out the smaller breweries.  But, despite the current beer market, 1980 was also the year that Ken Grossman and Paul Camusi founded Sierra Nevada Brewing Company in Chico, CA and the beginning of the rise of craft breweries in the US.

Ken and Paul were friends that went to college together at California State University and after college their dream was to start a brewery together, and they named it after the nearby mountains that Ken loved to hike.  Ken had been homebrewing since the 60’s in southern California where he was from but moved up to Chico after visiting some friends and falling in love with the town.

The startup wasn’t easy for Ken and Paul though.  First, they didn’t have enough money to start the brewery, so they borrowed what they could from friends and family and Ken had to sell his Homebrew supplies shop he owned to put together $100,000.  After figuring out the money situation came finding brewing equipment for their size of operation, which there were none out on the market.  So, Ken went out, taught himself refrigeration and welding, and hit the road rummaging old dairy farms and finding other scrap metal to put together his own brewing equipment.

The brewery was finally put together in the fall of 1980, and they brewed their first beer, an American Stout, which the recipe hasn’t changed much over the years and is still brewed today.  Their second beer they brewed took a few attempts to perfect but once they did they knew they had something special on their hands.  That beer, Sierra Nevada Pale Ale, is now their flagship beer and a big reason why they are still in business to this day.

At first sales were slow, but slowly gained recognition locally and by 1983 they were struggling to keep up with demand on their homemade brewhouse.  It took a few years to gain enough capital to expand and in 1987 they broke ground on a new brewery to house an old 100-barrel German copper brewhouse.  That brewery was finished a year later and kept them up with demand until 1997.

In 1997, they expanded their brewery to add on a 200-barrel brewhouse and add more room for beer testing to ensure the quality of their beer.  With this expansion they increased their production possibility to 600,000 barrels per year.

By 2014, Sierra Nevada had already been distributing to all the US, but to ensure fresher quality beer to their customers they opened an East Coast Brewery in Mills River North Carolina.  And in 2015 they opened a taproom and restaurant to the new brewery.  This new brewery was also built to be environmentally friendly and was awarded the Leadership in Energy and Environmental Design Platinum Status which is the only production brewery to receive the certification in the nation. 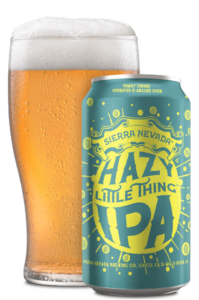 Hazy Little Thing is Sierra Nevada’s take on a New England Style IPA that is unfiltered, unprocessed, straight from the tank to the bottle.  It is a very refreshing lighter style IPA that doesn’t hit you with strong bitterness that some other IPA’s tend to have.  Its flavor is loaded with fruit forward style hops which gives you a big citrus flavor with a little bit of pineapple.  Overall it makes for a delicious IPA that is approachable to IPA and non IPA drinkers.  ABV: 6.7%, IBUs: 40. 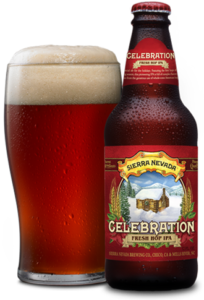 Sierra Nevada’s Celebration Ale was first made a year after the company was founded and is still going strong to this day.  Celebration is their winter seasonal and represents a time honored tradition of brewing a special beer for the holiday season. There are generous portions of barley malts and fine whole hops of several varieties, creating a brew with a full, rich and hearty character.  ABV: 6.8%, IBUs: 65. 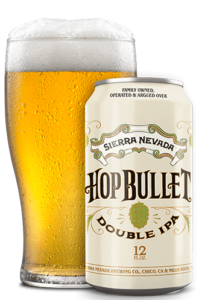 Hop Bullet is Sierra Nevada’s Double IPA that originally was a seasonal but is now being offered year round.  “With Hop Bullet, we’re using a new technique, hitting the beer with a double-barreled blast of Magnum hops and lupulin dust—pure, concentrated hop flavor—directly into the tank to emphasize the intense pine and citrus flavors of classic West Coast hops.”  This process brings forward a very interesting Double IPA.  It is loaded with aromas of tropical and citrus hops with a lingering of floral and toasty malt notes.  The flavor is similar to the nose, tropical and citrus flavors followed by a nice malt backbone and a lingering earthy bitterness at the end.  Overall, for a Double IPA it is more well balanced, and refreshing compared to some others that can be overpowering.  ABV: 8.0%, IBUs: 55.

FOR MORE INFO AND TO SEE SIERRA NEVADA’S FULL LINE UP, VISIT:  sierranevada.com