Rhombus Guys Brewpub opened in Downtown Grand Forks in 2015 by entrepreneurs Matt Winjum and Arron Hendricks.  But the idea of opening a brewpub had been brewing in their heads 15+ years prior when the friends started doing some home brewing in high school in Thief River Falls. Although it was their dream back in high school, it took them a bit of time and a few other entrepreneurial ventures before they finally opened the brewpub.

Their first venture, and origin of their business name, came after high school when the two decided to start their own small business during summer vacation.  They started a smoothie stand to bring around to summertime music festivals and events around the area.  But when they built the stand on a snowmobile trailer, they must have messed up a couple of measurements because the shape of the stand was more Rhombus than square, so they named themselves Smoothies Rhombus.  From there everyone began calling them the Rhombus Guys and the name stuck.

For the next 10+ years after the smoothie stand, they moved onto their next venture of opening a pizzeria in Mentor, MN called Rhombus Guys where they focused on serving craft beer with a menu full of delicious pizzas.  With the success of the Mentor location they also opened other Rhombus Guys pizzerias in Thief River Falls (now closed), Grand Forks, and Fargo.  But they still had the itch for their dream venture of owning a brewery/brewpub. 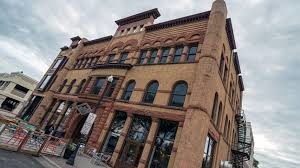 Finally, in 2015, after a ton of renovations to the old opera house that stood vacant since 1997, the two opened Rhombus Guys Brewing and Brewpub; they had finally accomplished their longtime dream.  They brought on Chad Gunderson as their head brewer, who was a UND graduate and had brewing experience at Lewis and Clark Brewing in Walker, MN and Mighty Mo Brewing in Great Falls, MN.  With the help of their notoriety from their successful pizzerias business started off great. 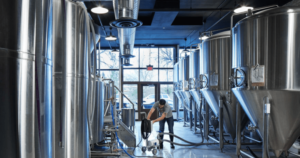 In 2017, Matt and Arron hired Jacob Hamilton as their new head brewer who was previously with Mankato Brewing.  Since hiring Jacob they were able to continue on with their core brands while bringing in a fresh and creative mind in Jacob to help whip up some delectable new beers. 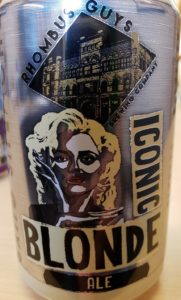 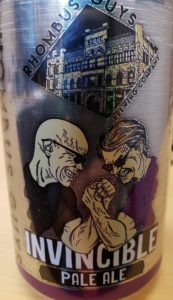 Pale in color and refreshingly hoppy, Invincible Pale Ale is a perfect balance of malt and hops. Brewed with North Dakota growth 2-row malted barley, ESB malt, Munich malt, Crystal malt, and it’s topped off with a pronounced quantity of Pacific Northwest Hops. Floral, citrus, and tropical tones of grapefruit will leave you with an aromatic experience. Drinking this beer may make you invincible.  ABV: 5.5%, IBUs: 40 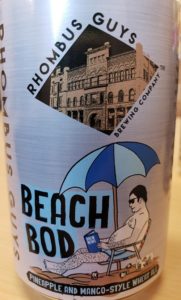 No, this beer won’t give you that beach body you’ve been working for, but it will help you escape to the beach. The beer features mango and pineapple to remind you of the tropics. It’s the perfect beer for laying by the water.  ABV: 4.8%, IBUs: 12