Born in Fort Collins, Colorado, New Belgium Brewery is currently the fourth largest craft brewery in the U.S. only succeeded  by #1 Yuengling, #2 Boston Beer Co., and #3 Sierra Nevada Brewing Co.  New Belgium was founded by Jeff Lebesch and his wife Kim Jordan.  Jeff was a successful electrical engineer but his love of beer got him started on home brewing; and after bicycling through Europe, tasting and learning about Belgian beers, he started brewing those styles in his basement when he got home.  This is where he came up with the now famous Fat Tire and Abbey recipes.  Soon after, in 1991, Jeff and Kim started New Belgium Brewing Company.

Their beers became popular in the first year with the help of Kim’s marketing and their neighbors artwork that they used for the labels on their bottles, and continued using for many years.  In 1992 they purchased a former rail freight warehouse in Fort Collins to use as their brewery but they soon outgrew that space.  In 1995 they built a brewery just down the street and it is still their home today with the help of expansions throughout the years.

Currently New Belgium distributes to 38 states, but they are looking to expand even further.  In 2014 they started construction of a new brewery in Ashville, North Carolina, the same town that Sierra Nevada recently built their new east coast brewery.  New Belgium and Sierra Nevada are doing this in order to distribute fresh beer to the eastern states, since they are both located in the west.  New Belgium is planning to start brewing in Ashville in early 2016.

In 2008 New Belgium was rated #1 for “Best Place to Work” by Outside magazine, #7 in 2014.  And for good reason… New Belgium believes that employee happiness is very important for business.  So much so that they included it in their Core Values and Beliefs, “#10: Having Fun.”  In order to achieve this there are plenty of activities and games all over the brewery to indulge in on your free time.  Some examples are ping pong, soccer, horse shoes, volleyball, and even a slide to get you from the second to first floor if you’re in a hurry.  Employees also receive a free beer after every shift, along with a free case per week.  New Belgium even awards their employees at milestones of working at the brewery.  After one year at the brewery they are given a personalized cruiser bike, at five years they get to go on a one week tour of Belgium, and at ten years they get a one month sabbatical.

Finally, New Belgium is a strong believer and supporter of sustainability. They do whatever they can to help out the environment.  To start off they do as much as they can to conserve water and energy.  New Belgium actually pays extra so that their entire brewery is run off of wind power.  To further conserve power they capture heat that is created during the brewing process and use it to heat other parts of the brewery.  They also reduce waste by recycling anything they can, and have a New Belgium Prius for employees to use for any business errands.  These are just a few examples of how far they go to be a sustainable company, always striving to help the earth in any way they can. 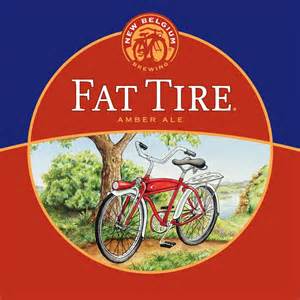 Fat Tire is New Belgium’s flagship beer that started it all. It was the first recipe that Jeff came up with in his basement and has been New Belgium’s best seller to this day.  It’s deep amber in color and has an aroma of nutty malty goodness with a little bit of hops.  The flavor is of roasted nuts, malt, and mild fruitiness.  Overall this is a medium bodied, smooth, easy drinking beer that pairs well with most pub meals. ABV – 5.2%, IBUs – 22.  Beer Advocate: 82 points – good 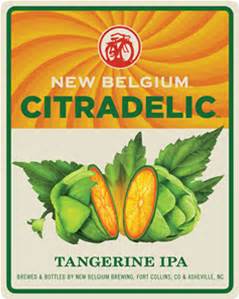 The Citradelic is one of New Belgium’s new beers released in January. It is a citra hop IPA blended beautifully with tangerine peel.  You smell the citra hops with a bit of sweetness on the nose.  The tangerine fruitiness comes in to play when you taste it, along with citrus.  It finishes with just enough bitterness from the hops to even out the sweetness.  ABV – 6%, IBUs – 50.  Beer Advocate: 88 points – very good.  Ratebeer: 96 points. 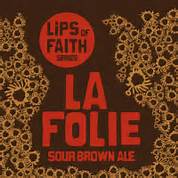 The La Folie is a sour beer released seasonally and it comes in a 22oz bomber. It is aged in 1-3 years in giant oak barrels.  It’s a dark reddish brown color.  Granny apple and cherry are noticeable in the scent.  The tart cherry is the prominent flavor carried in the taste with hints of cinnamon, grapefruit, and lemongrass.  ABV – %7, IBUs – 18.  Beer Advocate: 94 points – outstanding.  Ratebeer: 100 points.