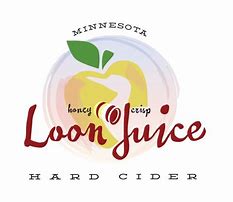 BEER/CIDER OF THE MONTH – SEPTEMBER 2018

Loon Juice is a craft cider brand and from the name it’s easy to determine that it is produced in Minnesota, being that the state bird is the loon. The Cidery is located at the Four Daughters Winery in Spring Valley, MN, just outside Rochester.  So, to get the full history of how Loon Juice came to be, we need to know a brief history of the winery.

Gary and Vicky Vogt were your typical farmers in MN. They grew mostly corn and soybeans while raising four daughters.  For their vacations they loved going to wine country in California and wineries in Italy.  All four daughters grew up and moved away as they did not have any interest in the family farming business.  So, to draw her daughters back home, Vicky started devising a plan for a business venture that the whole family could join.

With the entire family having a love for wine, Vicky and Gary thought a winery could be an illustrious family business and attended a wine conference to get assimilated to the wine industry. Then, after creating a business plan they set off on converting their farmland into a winery and were able to draw two of their daughters and their families back home to help them with the new family business.

They officially opened their doors in 2011 as a winery, restaurant, and event center. With the help of being located close to Rochester, they had immediate success to the point of becoming the largest winery in MN in just five years.  Since opening they have made additions to the winery and cidery to keep up with demand and add space for events.  Part of that success came with the introduction of Loon Juice to go along with their wine.

The birth of Loon Juice came when Justin (Four Daughters Winemaker) noticed that, when it came to making ciders, everyone was overcomplicating the process and adding extra ingredients to achieve a certain flavor or sweetness. He decided he wanted to try his hand at ciders with a traditional approach.

Justin believed that the Honeycrisp Apple was the kind of apple with the best flavor and got going on his new concoction. To make it, he bought pre-pressed apples from an apple farm nearby and added Champagne yeast to let the cider ferment.  Once the cider was done fermenting he filtered it until it was clear then mixed it with fresh Honeycrisp apple juice until he got his desired alcohol content of 6%.  A very simple process to make a delicious and refreshing hard cider unlike other companies that take extra steps to add sugar, artificial flavors, and food coloring.

Loon Juice was first introduced at the Winery in 2012 as a seasonal offering. But it didn’t take long for people to try the cider and fall in love with it.  So, with the substantial success from both one time and returning customers, the family decided to start distributing their delicious cider.

They started distributing Loon Juice in 2014 in 5L kegs to local bars and restaurants where more and more people tried and fell in love with the cider. Eventually the 5L kegs weren’t enough to keep up with demand and people wanted it in cans that they could take home or bring to the lakes.  So, in 2016, Four Daughters Winery made an expansion that was mainly meant to house more room for producing Loon Juice.  With the expansion they brought in a new canning line that has a production speed of filling 200 cans per minute.

Loon Juice is now distributed to all of Minnesota and parts of North Dakota, South Dakota, and Wisconsin. They have also expanded past the original Honeycrisp flavor and have added more like Strawberry Shandy, Grow a Pear, Ginger Mojito, and Tea Time.

They said that the Honeycrisp apple is unfit for hard cider. They said it wouldn’t work unless you added buckets of sweeteners. They said lots of stuff. Blah blah blah. We harnessed the power of this most coveted apple and concocted this bubbly beverage that finishes like champagne. All hail the Honeycrisp!  ABV: 6.0% 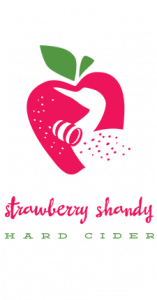 Warning: Your taste buds are about to have a pillow fight. We combined strawberries with our signature Honeycrisp apples and lemonade to form a strawberry, apple-y, lemony, deliciously awesome… thingy. Enjoy!  ABV: 5.5% 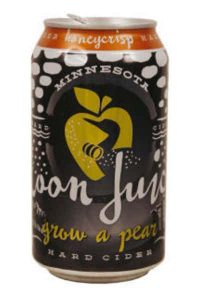 A drink with a message. Whether you heed our directive or not, you’ll love this crisp cider with all its pear deliciousness. This cider is named in honor of all the hard-working pear growers out there. It’s tough work growing pears and it should not go unrecognized. Whether you’re a professional or hobbyist, man or woman, old or young it doesn’t matter. If you grew, are growing, or will grow pears, we salute you!  ABV: 8.00%