The first batch of beer brewed in the process of creating Lagunitas Brewing Company was a bit of a disaster, but it was surprisingly the start of growing into a craft giant.  Tony Magee, the founder of Lagunitas Brewing Co., looked at brewing as if it were like making music, which he had a background in.  He believes that the process of making both are very similar.  Unfortunately, his first piece of work for brewing ended up boiling over and ruining his stove.  But he didn’t let that stop him and eventually created his best piece that is regarded as one of, if not the best IPAs in the States, the Lagunitas IPA.

Tony Magee founded Lagunitas Brewing Co. in 1993 with his first brewing system in Lagunitas, California. But, the building that he originated in began having plumbing problems, so Tony packed up and moved operation over to Petaluma, California where it’s headquarters are at today.

Since opening, Lagunitas had started like most craft brewers, slow,trying to get the public notice your beers, and appreciate your style and personality as a business. Eventually, in the mid-2000s, after winning some awards on their beers, people began to take notice in a big way.  Lagunitas started growing at a surprising rate.  In 2004, they brewed 27,000 barrels of beer and grew to 106,000 barrels in 2010 then to 800,000 barrels in 2015.

Currently Lagunitas has 2 breweries, the original in Petaluma, and a second one built in 2014 in Chicago. Also, a third brewery is in the process of being built and is set to be at full production in early 2018.  Once the third brewery is up and running Lagunitas will have a combined 1,900,000 yearly barrel brewing capacity between all three breweries; quite a bit more than what is needed currently but they are planning for the future.

In 2015, Lagunitas sold half of its stakes to Heineken International, the Netherlands based brewing company is one of the biggest brewers in the world. Tony remained the CEO of the company until 2017 when Heineken bought the other 50% where Tony moved into the role of global craft director for Heineken.

Most people criticize the move, saying that they are selling out and ruining craft brewing. But Tony, who was and still criticizes sell-outs, has a different perspective on the business move.  He sees it as an opportunity to accelerate the growth of Lagunitas by pairing a highly popular brewery with the global reach that Heineken can provide for them with production and transportation facilities.  Essentially Lagunitas Brewing Co. will still be Lagunitas Brewing Co. and business will be ran the same.  The only difference is that they will be able to bring the Craft Beer Boom that we are experiencing in the U.S. to other countries across the globe.

The Lagunitas IPA is there flagship beer and rightfully so because it a full flavored easy drinking IPA. It pours a clear golden yellow with aromas of sweet citrus, piney dankness, and a hint of caramel.  The taste starts off with pine hops, then leads into more tropical fruits like grapefruit and mandarin, finally the caramel smooths out the hops leaving a very satisfyingly refreshing feeling in the mouth.  This beer embodies what it is to be an IPA, nothing extra or crazy to scare off potential drinkers or confuse the palate.  If I ever find myself quenching the thirst of great straight forward IPA, the Lagunitas IPA is at the top of my list.  ABV – 6.2%, IBUs – 51.5.  Beer Advocate score: 87 points, very good. 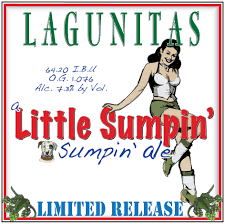 For this beer Lagunitas decided to “combine” a couple styles of beer. Its malt make up is 50% wheat to give it the feel of a wheat ale but it packs enough hops to give it a feel of a pale ale.  The beer pours a brilliant gold and carries smells of citrus, floral, pine, with just the slightest malt.  The flavor is the same as what you get on the nose.  But the most noteworthy is the mouthfeel as the wheat mixed with the amount of hops gives it a silky smooth finish.   ABV – 7.5%, IBUs – 65.  Beer Advocate score: 89 points, very good. 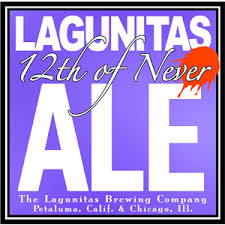 The 12th of Never Ale is Lagunitas’s first ever beer in a can.  It pours a pale golden yellow with aromas of citrus, grapefruit, and lemon.  Flavor is crisp with a little malt, tropical fruits, there is just a touch of bitterness, and a little bit of pine.  This is a very well built beer made for easy drinking in the backyard with friends but has flavor to make them very enjoyable.  ABV – 5.5%, IBUs – 45.  Beer Advocate score: 93 points, outstanding.

FOR MOR INFORMATION ON LAGUNITAS AND THEIR ENTIRE LINE UP, VISIT: lagunitas.com/