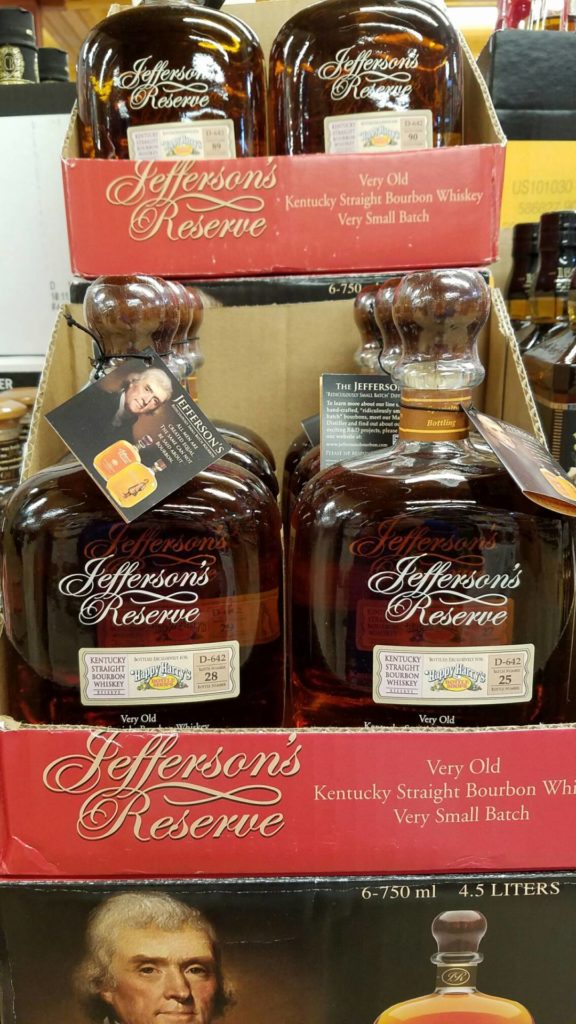 Recently I had the opportunity to taste 24 barrel samples for Happy Harry’s from Jefferson’s Bourbon.  After a little background on Jefferson’s, I will tell you my selection methodology.

Jefferson’s Bourbon is an NDP (non-distillery producer) of bourbon that has been around since 1997.  Their founder, Trey Zoeller, has had bourbon in his blood for several generations dating back to an 8th generation grandmother who was a notorious bootlegger and producer of moonshine.  He bought stocks of old Stitzel-Weller (older Pappy was also S-W) barrels and bottled them under the Jefferson’s Presidential line. Now discontinued, they ranged from 17-30 year old bourbons and ryes.  I recently had the 18 and 20 year old bourbons and they were incredible.  Zoeller used the name Jefferson because of name recognition and didn’t want to spend a fortune on brand marketing.  Thomas Jefferson actually wasn’t a whiskey fan but could be credited with being one of the greatest whiskey Presidents.  He repealed the whiskey tax and signed the Louisiana Purchase that opened the markets for bourbon makers.

Jefferson’s currently has around 4-5 bourbons on the market including a couple experimental and barrel-finished bourbons.  Personally, I think the Jefferson’s Reserve is the most consistent, and highest quality bourbon they release.  They take stocks of bourbon as old as 15 years and blend them with approximately 3-4 younger bourbons.  I find the end result to be more of a refined bourbon with subtle nuances that change upon the amount of time in your glass.  If you’re comparing it to wine, it’s more Bordeaux red than California cabernet. 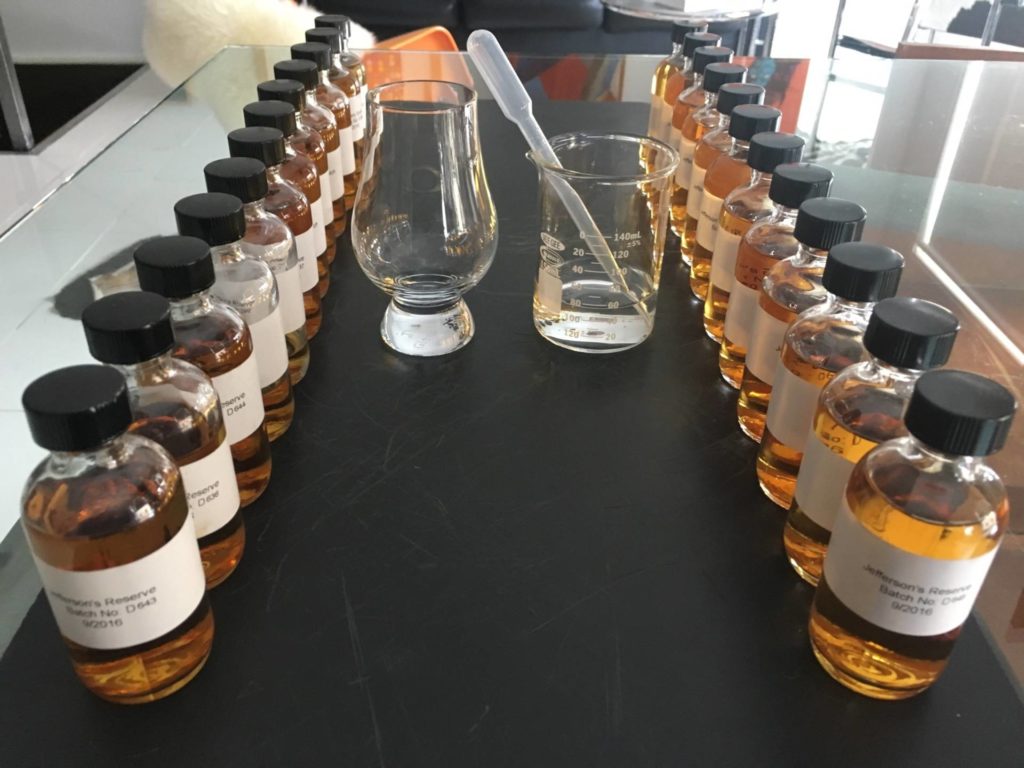 It is a daunting task (albeit a fun one!) sampling 24 bourbons.  It took me around 10 sessions to come up with my selection.  I used Glencairn whiskey glasses as my vessel of choice, along with a pipette (water dropper) and some bottled water with a limestone source (limestone water is the main ingredient of bourbon- Trader Joe’s is limestone sourced).

At first tasting, I pour a half ounce (about 15 millimeters) into 6 glasses and let them sit for exactly 5 minutes.  I highly recommend you do this to a fresh bottle of bourbon at home.  It opens it up and takes away an initial astringency and that alcohol heat (I even decant some bottles and put them back in the original bottle it came in).  I take a very small sip, just enough to coat my tongue.  I do the same thing again, except for adding 3 drops of water and tasting again.  Some of the flavor profiles will change and some will not with the addition of water.  I rank them 1-6.  I stop tasting and drink a glass of water with a couple of soda crackers.  I repeat this process 4 times until all 24 samples are tasted.  The top 2 in each bracket go on to the next round which gives another day to refresh your palette.

With 8 remaining samples, I rate them 1-8 in one tasting. The top 3 get special treatment.  On the final day of sampling, I pour 3 samples of the remaining 3 and blind taste each group and give it a rating.  By this time, I can usually taste my favorite from round to round as was the case with the Jefferson’s.  In tasting the final bunch, I am looking for depth, complexity (how many adjectives can I put to a bourbon) and most important for me is the length of finish.  If you don’t have a very long finish (how long you can taste the bourbon in your mouth) you can’t judge depth or complexity.

As a follow up, I had a couple friends blind taste it next to a Van Winkle Special Reserve 12 year bourbon (90.4 proof) and both liked the Jefferson’s (90.2 proof) better!  I am very excited to have you try this bourbon this holiday season- I put a lot of love into selecting something for your enjoyment!

NOSE– Butterscotch, raisins, oak and a touch of hay and no alcohol burn.  Opened up some vanilla and softened the oak after 3 drops of water.

TASTE–  A bit of oak (good), brown sugar and some dry spice (cinnamon, clove and nutmeg all at once).

FINISH– Coats your mouth with a nice level of viscosity and a nice long finish (25+ seconds).  Very smooth for a 90 proof bourbon.

SERVING NOTES: Wait 5 minutes upon pouring and add a few drops of water if drinking neat or dive right in if drinking on the rocks.

Available at all locations, while supplies last!