Are you looking for a new brewery to try? One that is local, that offers new adventurous styles of beer, that gives your taste buds something to marvel at, and that helps you bear the weather of the upper mid-west. If your answer is “Why yes, indeed I am.” Then within your answer lies the brewery you are looking for; Indeed Brewing Company.

Indeed was founded back in 2011 by three former college roommates at the University of Minnesota, now best friends, Thomas Whisenand, Rachel Anderson, and Nathan Berndt. After college they all went off to start their own careers but the love of beer kept them together as friends, so much so that they left those jobs to start brewing their own beers.

They hired Josh Bischoff as their head brewer, former brewer of the Town Hall Brewery of Minneapolis. He has won multiple awards for his beers including a silver medal at Denver’s Great American Beer Festival back in 2011 for his beer L.S.D., a beer brewed with lavender, sunflower honey, and dates. L.S.D. is now an Indeed specialty beer that is available in limited amounts in May.

The brewery itself is located on 711 15th Ave. NE Minneapolis, MN. It is in the Northeast Minneapolis Arts District, 2 mile North of the University of Minnesota. In August of 2012 they opened the doors to their taproom that quickly became a hotspot for people in the area to hang out at. And then in July of 2013 they built an expansion to the brewery that doubled their brewing capacity. Their taproom sports 16 taps of their year round, seasonal, and specialty beers. If you are interested in their brewery hours or tours visit their website at http://www.indeedbrewing.com/.

The founders of Indeed are very adventurous and they carry that adventurous spirit in their brewing style. They like to push the boundaries of every style of beer they brew, incorporating many different and extravagant flavors, using the best ingredients available. Their Mexican Imperial Lager, which won a silver medal at Great American Beer Festival in 2014, their Yamma Jamma sweet potato fall seasonal, and their Derailed Imperial Double Dangerous Chocolate Nitro Whiskey Queen Milk Stout are just a few examples of this. Recently in 2014 they started a barrel aged sours program called Wooden Soul. Unfortunately, for the time being, these are only available at their taproom.

The founders of Indeed have family ties throughout North Dakota so it has been an ambition of theirs to be able to distribute their beers there. In September of 2015 they started do just that. Their available beers for North Dakota include their year round beers, their American Pale Ale Day Tripper, Black IPA Midnight Rider, and Pale Lager Dandy Lager. Along with all of their seasonal selections as well. 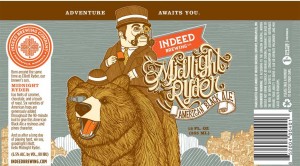 In my personal opinion I haven’t found many Black IPA’s that I have enjoyed. I feel like it is difficult to pair the robust darkness of the brew with the bitter hoppyness. But with this brew Indeed has been able to do just that. It pours a deep dark brown with scents of roasted malts, caramel, and a hint of coffee. In the taste you get roasty malts and a little bit of chocolate mixed with piney hop flavors. Like I said before it is tough to make these flavors work but Indeed did a great job getting them to mingle just right.  ABV – 6.5%,  IBUs – 80,  Beer Advocate Rating – 90 – Outstanding 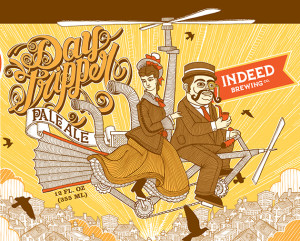 This American Pale Ale is packed with four pounds of hops per barrel geared towards a West Coast style. Pours a hazy gold color with scents of fresh citrus hops, and a few floral notes. It’s flavor profile is filled with pine and citrus with hints sweet honey and caramel flavors that come through at the end. Overall it is a delicious Pale Ale that has excellent flavor and balance.  ABV – 5.4, IBUs – 45, Beer Advocate Rating – 90 – Outstanding 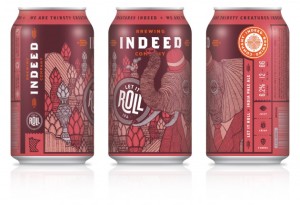 Let it Roll is part of a two part seasonal and is available from August to January. Let it Ride is the other part of the seasonal series available from February to July. Let it ride is a summer IPA that has more of a citrus hop flavor perfect to quench your thirst in the heat. Where Let it Roll has a little bit of the citrus hops but also includes a spicy malt to warm you up in the winter cold. Let it Roll pours out to copper red color with an aroma of pine, citrus, fruit, and a sharp malt scent. It has heavy flavors of earth, pine, and citrus with a bitter malt backbone. This IPA carries a strong and diverse profile of scents and tastes but is blended great to make a flavorful IPA that pairs up great with the Fall season.  ABV – 6.2, IBUs – 86, Beer Advocate Rating – 87 – Very Good