March 17th, St. Patrick’s Day…began as a religious feast day for the patron saint of Ireland has become an international festival celebrating Irish culture. Here are some fun facts and a few “Irish Spirits” to help you celebrate being just a wee bit Irish today!   Sláinte! 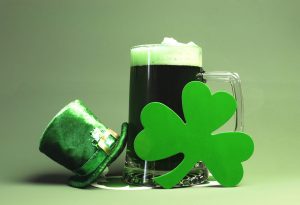 According to some accounts, the original holiday color was blue. Sometime in the 18th century green became the mainstay, representing the lush landscape of The Emerald Isle, the nation’s symbolic shamrock and the traditionally green Irish revolutionary flags.

In Irish folklore, leprechauns were cranky tricksters who you wouldn’t want to mess with. The cheerful, friendly ‘lil fairy most Americans associate with St. Paddy’s Day stems from a 1959 Walt Disney film called Darby O’Gill & the Little People. The Americanized, good-natured leprechaun soon became a symbol of St. Patrick’s Day and Ireland in general

In America during the early 1700s, revelers believed that wearing green made them invisible to leprechauns, who would pinch and, in some accounts, steal anyone they could see (i.e., anyone not wearing green). People began pinching those not wearing green on St. Paddy’s Day as a reminder to beware of the wily little sprites.

You may have worn a shamrock tattoo or donned a clover-covered necklace on some St. Patrick’s Day past. According to Irish legend, St. Patrick used a three-leaved clover, or shamrock, to illustrate the idea of the Holy Trinity, versus the good luck associated with the four-leaved variety, a mistake many Americans make.

Without a doubt the most popular Paddy’s Day T-shirt slogan, “Kiss Me, I’m Irish,” is a reference to The Blarney Stone. Legend holds that kissing the stone brings good luck. If you can’t make it to Ireland to kiss the actual stone, convention says the next-best option is to kiss an Irishman. We’re pretty certain a guy invented this tradition.

Until the 1970s, a law required all Irish pubs to close every March 17th. Drinking on St. Paddy’s really only became popular in Ireland post-1995.  Guinness Dry Stout was first brewed in Dublin during the mid-18th century and has become one of Ireland’s most famous exports. Though the company has no formal connection to St. Patrick’s Day, since the brew is tantamount to Ireland and Irish bars, it has become the unofficial drink of the holiday.

Now for the good stuff, here are some traditional Irish spirits that are not only enjoyed on St. Patrick’s Day, but all year long!

JAMESON IRISH WHISKEY:  Jameson Irish Whiskey is triple distilled and made from Barley.  The Barley gives Irish Whiskey a more delicate and balanced flavor, especially when you compare it to Bourbon, Scotch or Canadian Whiskey.  Any whiskey drinker with find the rich, mellow flavors of Jameson easy to enjoy.  Jameson is great mixed with ginger ale, cranberry juice and a twist of lime, a splash of Cola or just served over ice.

REDBREAST IRISH WHISKEY:  For the whiskey drinker who likes a little more flavor, Redbreast is aged 12 years and delivers the same balanced flavors expected from Irish Whiskey. The addition aging gives Redbreast more flavors of caramel, toffee and a touch of oak.  Redbreast is best served over ice, but don’t be afraid to add a splash of soda if that is how you prefer to enjoy your whiskey.

IRISH MIST LIQUEUR:  Irish Mist is made with Irish Whiskey, honey and a variety of spices.  The flavor is smooth with a hint of honey sweetness, vanilla, toasted almond and chocolate.  Irish Mist is a great after dinner sipper, mixed with coffee or even mixed with cola and a squeeze of fresh lime.

BAILEYS IRISH CREAM:  Another Irish Whiskey based liqueur, Bailey’s is made with fresh farm cream..  Irish creams are one the most popular cordials served around the world because of their smooth and rich flavor and sweetness.  Irish Creams are most often served in coffee or over ice.

GUINNESS EXTRA STOUT:  This is it, the one that started it all. Crafted to perfection for over 200 years and is descended from the definitive West India Porter known as Extra Superior Porter. Crack it open, and the first sip tastes as fresh as ever. The unmistakable deep-dark color, the crisp hint of roasted barley, the fresh breeze of hops, and the refreshing bite all make for the bittersweet reward.
The above St Patrick’s Day facts are from msn.com: “The meaning behind wacky St Patrick’s Day traditions”