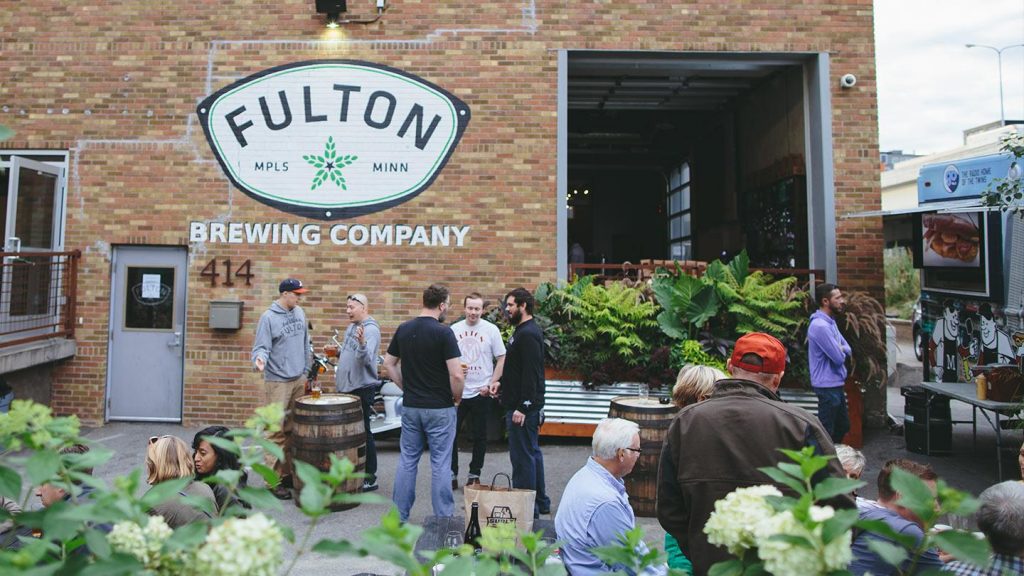 It started back in 2006, as a shared hobby amongst friends. Jim Diley and Peter Grande started brewing beer in their garage.  After a few years of home brewing they had perfected a few recipes that they, and their friends, family, and neighbors really enjoyed.  These beers were called Sweet Child of Vine, Lonely Blonde, Worthy Adversary, and The Libertine; all beers that they currently sell.

In 2009 by Jim Diley, Peter Grande, Ryan Petz, and Brian Hoffman founded Fulton Brewery. They got the name Fulton from the neighborhood where they first started brewing in Minneapolis, Minnesota.

They began looking for ways to grow their company outside of their garage. Together they didn’t have the available means to put money in to a brewery, so they went with the next best option.  They started contract brewing out of Sand Creek Brewing Co. in Wisconsin where they also cultured knowledge about running a brewery.  Once their beer was on the market things really took off.

Less than a year after selling their first beer to the public, they had their beers in over 100 bars in the Minneapolis/St. Paul area. Fulton finally had the capital to sign a lease for their own brewery, which is located in the North Loop in Minneapolis, near Target Field.

With the help of a legislation change (allowing breweries to have taprooms) and impeccable timing, Fulton was able to open Minneapolis’ first taproom in March 2012. Unfortunately, adding the taproom to their plans took away quite a bit of space for their downtown brewery.  So much so that they still had to contract brew through Sand Creek Brewing because of the lack of room for their own bottle packaging line.

With their continued growth and demand for their beer, they soon decided they needed more space. On September 1, 2013 they open up their second brewery in north east Minneapolis.  With the new 51,000 square foot brewery, 8 times the size of their downtown brewery, they were able to centralize their offices, have enough room to brew all of the beer needed to service the area, and include their own bottle packaging line.  The downtown brewery and taproom remained open, and became more of an experimental and small batch brewery to test out new beers.

The Lonely Blonde is an American Blonde Ale that has a golden color and has scents of bread and sweet malts. The taste is of sweet creamy malt, with a hint of hops, and finishes off very crisp and clean.  Overall this is a perfect blonde ale that gives you the right amount of flavor and quenches your thirst.  It is a great beer for a grill out, or to cool you off after a long day in the sun.  ABV – 4.8%, IBUs – 29.  Beer Advocate: 79 points

The Ringer is an American Pale Ale, it is a hazy amber color and carries a scent of light malts, citrus, and pine. The flavor comes through with initially with the citrus fruits with orange leading the way.  The fruitiness fades and is followed up by a light malt to finish.  It’s a great take on the American Pale Ale that has the right amount of fruitiness to bring you back for another.  ABV – 5%, IBUs – 35.  Beer Advocate: 85 Points – very good.

The Sweet Child of Vine is Fulton’s IPA; it is dark amber in color with scents of floral hops, citrus, and caramel. It starts off with a slight sweetness in the taste and then the citrus, piney hops come rushing in and fades to a nice caramel malt backbone to really smooth out the beer.  Not your average run of the mill IPA, but one that tastes exceptionally good with a smooth finish. ABV – 6.4%,  IBUs – 69.  Beer Advocate: 81 points – good.