The idea for a brewery in Fargo started back in the mid-2000s when two sets of Fargo natives noticed the lack of quality beer in the area and wanted to do something about it.

Jared Hardy had been in the Washington craft beer area when he first realized his ambition to bring good beer to his home town of Fargo.  When he got home he started planning and brought the idea to his classmate Aaron Hill, who was more than eager to join the team.

Eventually a mutual friend introduced the two groups and a partnership ensued driven by similar ideas, aspirations, and goals.  In the summer of 2010, they officially became the Fargo Brewing Company and started brewing in Jared Hardy’s garage to work on their recipes.  After running a fundraising campaign they decided to dip their toes in the water before diving in head first.

In 2011 they started a contract with Sand Creek Brewery out of Wisconsin to brew the first batches of Fargo Brewing Company Beer.  After the overwhelming love from the Fargo beer consumers the guys dove in and on January 31, 2013 they leased their current property at 610 North University Drive – Fargo, where they began to set up their brewery.  They were able to brew their first batch in the brewery in June of 2013 and have been vigorously brewing since.

At the brewery they have 10 full time employees and 4 part time to run the operation.  On average they brew 3,000 gallons of beer each week.  They’ve brewed nearly 30 different kinds of beers that have been available in bars around the area or at their in house tap room.  In the future they hope to start a line of bombers of their specialty beers to be available in stores.  Currently, Fargo Brewing Company distributes to all of North Dakota, Eastern South Dakota, and most of Minnesota.

The guys at Fargo Brewing love their home in Fargo and the surrounding area which is why their main goal, they are currently focused, on is to completely distribute to the tri-state area before they consider distributing anywhere else.

Right now their tap room is located at the brewery at 610 N University Drive in Fargo, where they have 10 different taps of their current beers.  Tap room hours are Tuesday through Friday from 4-10, and Saturday from 12pm-10.  They also have a weekly brewery tour that starts at noon every Saturday.  Trivia and other events like yoga on tap are also held in their tap room, check out the website for a list of events. http://fargobrewing.com/ 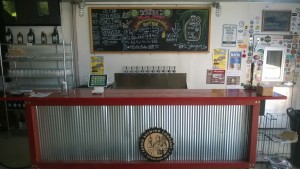 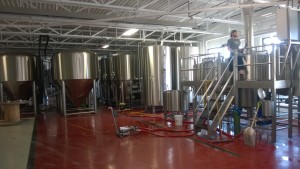 Wood Chipper was the first Fargo Brewing Co. beer available on tap that everyone fell in love with.  It’s a well balanced IPA that has a sweet, malty, citrus hop front with notes of herb, pine, and caramel.  The Wood Chipper is all around solid IPA that is full of flavor that goes down smooth and has you coming back for another one time and time again.  ABV 6.7%  IBUs 70

The Sodbuster is Fargo Brewing Co.’s deeper, darker beer that they package in 6pk cans.  It’s a robust malty Porter that is filled with flavors of chocolate, roasted coffee, and a little bit of smoke and cream that lingers leaving for a smooth finish.  Sodbuster is a delicious Porter that leaves you warm comfort to get you through the Fargo winters.  ABV 6.1%  IBUs 29

The Wind Swept is the summer seasonal for Fargo Brewing Co., so get it while the weather is warm!  It’s an exceptionally easy drinking wheat beer that is perfect to quench your thirst while in the sun playing a round of golf, sitting on a boat at the lakes, or relaxing after a long days work.  The Wind Swept has pours a golden brown color with a creamy head.  Flavors of coriander and orange are noticeable with a slight spice to finish. ABV 5.2%   IBUs 14