Born in the center of Illinois, Destihl has been constantly growing since starting as a Gastrobrewpub in 2007, located in Normal, Illinois, 130 miles Southwest of Chicago.  It’s the product of Matt Potts (Founder) having drive, ambition, and the pursuit to do something different.

Destihl’s story starts like most breweries, with homebrewing and wanting a more flavorful beer.  Matt was working as a lawyer in the 1990s when his wife, Lyn, bought him a homebrewing kit.  Matt decided to give it a try and before long it became a very enjoyable hobby.  After some time brewing at home an idea started brewing in his head of starting a brewery or brewpub.

Unfortunately, in Illinois, there were a bunch of laws that made starting a small business, especially a brewery, very challenging.  But, having a background in that line of work, Matt was able to lobby for a change in laws and opened the first Destihl Gastrobrewpub in 2007.  The Gastrobrewpub is a restaurant and brewery all in one where customers can stop by for delicious meal that is paired with in house craft beers.  From there on Matt continued to grow the brand as it gained recognition.

In 2011, Destihl opened a second Gastrobrewpub in Champaign, Illinois, which is 50 miles Southeast of Normal.  But that wasn’t the biggest change Destihl had that year, instead, it was when they brought their beer to the Great American Beer Fest in Denver, Colorado.  There, they soon became one of the most talked about surprises from all the beer lovers that attended, and their recognition grew tenfold. With this recognition the demand for their beer skyrocketed.

Since Destihl was only a Gastrobrewpub they didn’t do much for distribution and needed to upscale in order to meet demands for their beers.  So, in 2013, they opened Destihl Brewing in Bloomington, Illinois (5 miles South of Normal) in GE warehouses and started distributing.  But it didn’t take long to grow out of that space and another change was needed.

2016 brought huge change when Destihl broke ground for their $14 million Brewery that they now call home.  They opened the brewery and taproom doors in 2017 it has quickly become a favorite spot for locals and visitors.  The new brewery features a taproom that can accommodate 200 people and offers views into the entire brewing process from start to finish.  It also increased their potential number of barrels per year to 150,000 but their fermentation keeps it capped at 25,000 with room for expansion.

Destihl is continuing to grow and has a fantastic lineup of beers that everyone can enjoy.  They currently distribute to 30 states and have also recently started distribution to South Korea, United Kingdom, and Sweden. 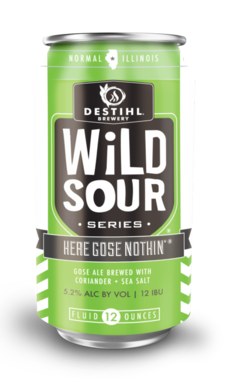 Destihl threw caution to the wind with their interpretation of a Leipzig-style Gose, featuring complex aromas and acidic flavors contributed by indigenous wild yeast and lactic fermentation. Lemon, lime and other citrus-like qualities are balanced by the spicy character of coriander and a mineral-mouthfeel from French sea salt, resulting in a refreshing beer that was worth the risk.  ABV: 5.2%,  IBUs: 12 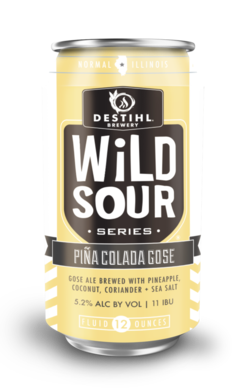 If you like Piña Coladas, then you’re going to love this fun, refreshing take on Destihl’s Leipzig-style Gose, which is brewed with pineapple and coconut for a tropical twist on this classic sour ale. The combination provides an added layer of sweet, fruity complexity to our Gose that is already known for its tart, citrusy qualities while still balanced by French sea salt and hints of spice from added coriander.  ABV: 5.7%,  IBUs: 11 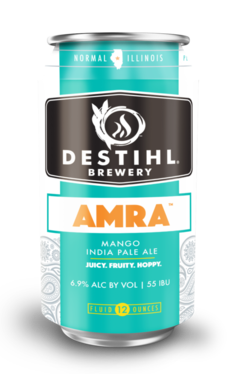 ‘Amra’ (Sanskrit for Mango) intertwines the citrusy hop characters of a west coast-style IPA with the fruitiness of juicy Mango, resulting in an elaborate and psychedelic tapestry of flavors that were absolutely destined for each other in this beer.  ABV: 6.9%, IBUs: 55