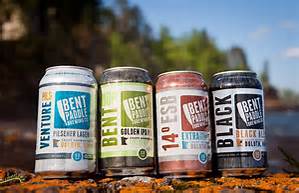 Located in Duluth, MN, Bent Paddle has quickly been gaining popularity in the craft beer market since they opened in May of 2013.  Bent Paddle Brewing Company got its name from the bent paddle that one of the owners, Bryon Tonnis, used to stir the beer mash at his previous job of head brewer at Rock Bottom Brewery.  The name also represents the love of outdoors and canoeing that the owners share.

The company is owned by two couples, Karen & Bryon Tonnis and Laura & Colin Mullen, who share a love for both beer and adventure.  Planning for the brewery started back in 2010 when Bryon and Colin found out they both had a dream to start their own brewery.  With similar ideas and ambitions for the brewery they underwent planning, and all four owners quit their jobs to work at the brewery when it opened.  Each owner has a pivotal role in everyday operations at the brewery. Bryon is the CEO and the Director of Brewing operations, Colin is the President and the Director of Brewery Communications, Karen is the Vice President of Operations, and Laura is the Vice President of Community and Outreach.

Bent Paddle Brewing Company is a big believer and promoter of sustainability.  Their mission statement is proof of it, “The mission of Bent Paddle Brewing Company is to brew craft beer with a concentration on sustainability for our business, employees, the environment, and the greater community – all while “Bending the Traditions” that we encounter, for a more unique and interesting craft beer experience.”  They have a long list of ways they remain sustainable in the community, which can be found on their website.  Here are just a few examples; their tap handles are made in Minnesota from 100% recycled materials, all of their spent grain is donated to local farmers to feed their livestock, and they also have local support for people with disabilities.

The 14o is an Extra Special Bitter, a style of beer that isn’t made by too many breweries in the U.S. but is a popular style overseas.  14o pours a rich amber color and has scents of sweet malts and a hint of hops.  The taste is clean and smooth with toffee malt flavors right away that leads into a slight citrus hop flavor.  Overall it is a easy drinking, well balanced ESB. ABV – 5.6%, IBUs – 32.  Beer Advocate: 88 points – very good.  Rate Beer: 83 points. 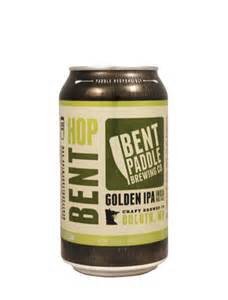 The Bent Hop IPA pours a golden amber colors and carries heavy aromas of citrus and tropical hops. The citrus hops leads the way in the flavor profile with just enough sweetness to make it a well balanced IPA.  Bent Paddle did a fabulous job with the balance and drinkability of this IPA and I’m looking forward to having it as a refreshing beer for the summer.  ABV – 6.2%, IBUs – 68.  Beer Advocate: 88 points, very good.  Rate Beer: 96 points.

The Cold-Press Black is Bent Paddle’s Black Ale infused with the cold press coffee “Crazy Juice”, from Duluth Coffee Co. It pours out black and smells like a fresh cup of coffee in the morning.  The coffee is definitely in the flavor as well but not overdone, just the right amount, and it finishes with a touch of bitterness to round it out just right.  This is a delicious beer for those who enjoy dark beer or coffee.  ABV – 6%, IBUs – 35.  Beer Advocate: 91 points, outstanding.  Rate Beer: 94 points.