Beaver Island Brewing Co. is an up and coming brewery out of St. Cloud Minnesota.  Co-Founders, Nick Barth and Matt Studer both took up homebrewing together back in 2013.  After a year of homebrewing, Nick and Matt found that they really enjoyed making beer, so much so that they wanted to turn it into their profession and start up a brewery.

Nick and Matt began the process of business planning in early 2014 and finally opened Beaver Island Brewing Co. in 2015, making it St. Cloud’s only local craft brewery if you don’t count the brewery/restaurant chain Granite City.  To help them create exceptional beer recipes, they brought on Chris Laumb as Beaver Island’s Brew Master.  For their location they chose the storefront that used to house the iconic Bo Diddley’s Deli in Downtown St. Cloud.

Since opening, Beaver Island has already found great success with the community of St. Cloud and is quickly becoming one of the must stop places for visitors.  Their original thought was that they would be able to get by with the storefront brewery for 5 years before they would have to consider finding more space.  They soon found that assumption to be wrong because just after a year and a half of being open they were starting to fall behind on demand with their limited production size.

In 2017, Beaver Island opened a production brewery that would increase their brewing capacity and incorporate a canning line.   The production brewery is where they plan on producing all their beer for distribution, while they still have the Downtown location for the face of the company and more experimental brewing.  With this new facility they have expanded their distribution to the Minneapolis St. Paul Minnesota area as well as Fargo and Grand Forks of North Dakota. They produced 3,300 barrels of beer in 2017 and set a goal for 5,000 for 2018. 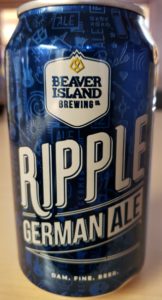 This fresh, German inspired ale has a golden color with a cracker-like malt profile. Couple that with the perfect balance of floral/spicy German hops from St. Cloud’s sister city Spalt, Germany and we believe we created the perfect session beer with a crisp, refreshing finish. ABV: 4.5%, IBUs: 24

A revolutionary spin on a coast-to-coast IPA. We circled the globe to find the perfect mash-up of Heritage UK malts and west coast hops. Let it inspire your next voyage.  ABV: 6.3%, IBUs: 77

Our Tip-Up winter ale is brewed with a touch of smoked German Beechwood smoked malt, Minnesota hops, and a late kettle addition of young Minnesota spruce tips. Our hope is to encompass the joys of MN winters; a warming fire, the scent of conifers, and a satisfying day on the lake waiting for the big one to hit our line.  ABV: 7.3%, IBUs: 34