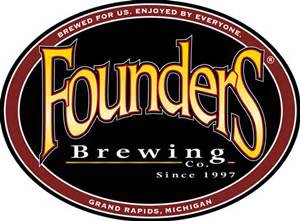 Founders is new to the North Dakota area.  Kegs of their beer first started showing up in June this year and as of late August, Founders is now available in bottles and cans. As of 2014, Founders is one of the top 20 biggest craft breweries in the United States.  Unfortunately their success didn’t come that easily as they were on the brink of bankruptcy earlier in the brewery’s life.

Founders was established in 1997, in Grand Rapids Michigan, as Canal Street Brewing Company by Mike Stevens and Dave Engbers.  The two were recent college graduates with full time jobs when they decided to take the plunge into brewing.  They came up with a business plan, took out some loans, quit their jobs, and opened up their brewery, Canal Street Brewing Co.  Their initial label on their beer had a picture of all the Canal Street breweries with “Founders” above it.  This label recognition led to the inevitable renaming of the company to Founders Brewing Company.  Early on they were attempting to brew beer that everyone would be able to enjoy, which led to them brewing average beers, lacking flavor and complexity.  These “average” beers led to hard times for the brewery early on and within a few years, they were on the verge of bankruptcy.  In 2001 their bank gave them their final warning.  That is when Mike and Dave decided they were done brewing beer for the masses.  They started brewing beer that they wanted to drink, beers that they claim to be, “Complex, in-your-face ales, with huge aromatics, bigger body, and tons of flavor.”  Soon after, things started to turn around for them and they haven’t looked back since.

With increased demand for their coveted full-flavored beers, they needed to grow.  In 2007 they moved to their new facility and have increased their area of distribution.  In 2014 they partnered with Mahou San Miguel brewery, Spain’s biggest brewer, to keep up with their ever increasing demand and to help get their name out to other markets.  In 2013 they had two beers in Beer Advocates top ten beers list, Kentucky Breakfast Stout and Canadian Breakfast Stout.  Also in 2013, Ratebeer.com ranked them as the 3rd best brewery in the world.  Founders is long past their days of financial quandary, constantly brewing remarkable beers geared by their philosophy, “We don’t brew beer for the masses.  Instead, our beers are crafted for a chosen few, a small cadre of renegades and rebels who enjoy a beer that pushes the limits of what is commonly accepted as taste. In short, we make beer for people like us.” 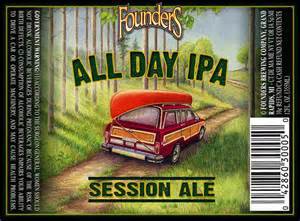 The name says it all; it is a session (below 5% alcohol content) IPA that you can enjoy all day without getting overwhelmed with bitterness or alcohol content.  Usually when you come across a session IPA it tends to lack flavor, but for the All Day IPA it does not come up short in the flavor department.  It carries robust flavors of citrus and tropical fruits with a little malt on the finish.  It’s a great beer to enjoy while hanging out with friends outside on a nice day that you can have multiples of without worrying about “getting out of hand.” All Day IPA comes in 6 pack bottles and 15 pack cans. 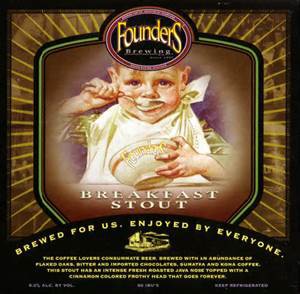 Founders Breakfast Stout is their fall/winter seasonal and comes in 4 pack bottles.  It has a score of 99 on beer advocate, making it one of the best rated breakfast stouts on the market.  Founders also ages it in Kentucky bourbon barrels (KBS), and Canadian whiskey barrels (CBS) as part of their limited release series.  These beers come in 750 ml bombers and are highly coveted in the craft beer world, so get them if you can.  Being a stout, FBS pours dark with chocolate and roasted coffee bean aromas.  The 8.3% ABV is obscured by the very well balanced and bold flavors, so it will sneak up on you.  You get the roasted coffee up front paired with bitterness, then it smoothes out with velvety oatmeal, molasses, and chocolate flavors.  To be honest this beer would go great with a tall stack of flap jacks on a Sunday morning; but if beer in the morning isn’t your style, it will also warm you up on a cold fall evening with the smells of fall complementing the flavor of the beer. 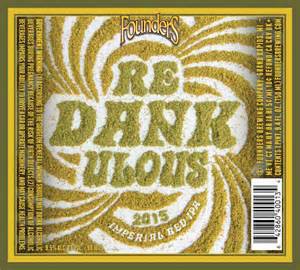 ReDANKulous, an Imperial Red IPA, is Founders 13th installment of their popular Backstage Series that comes in a 750 ml bomber.  This Imperial Red IPA is loaded with an eccentric hop profile that will get your head spinning.  Founders used Chinook, Mosaic, and Simcoe hops that give a marvelous combination of spicy, piney, and tropical “dank” aroma.  Floral, mango, pine, and caramel are just some of the flavors you experience with this beer, paired with the intense but not overwhelming bitterness.  This beer has a lot going on, but is so well balanced you know it was brewed with passion.