Wild Terra Cider was started by two wild kids, Ethan and Breezee Hennings with the vision to bring innovative, drinkable cider to Fargo.

After living in Washington state for 8 years they decided to move with their two kids back to Fargo in 2011. Ethan started home brewing beer and making cider in 2012 and became part of the local home brewing club.  A friend’s wedding brought them back to Washington in the fall of 2015, along this trip they stopped at Capitol Cider, a cider bar in Seattle WA. They were surprised at how different and interesting the ciders they had, compared to what they were expecting. The range of products offered along with food, the depth and variety of ciders and the warm, laid back atmosphere was what sparked their passion to pursue bringing this concept to Fargo. Seeing the lack of good representation of not only drinkable but innovative cider in their region, WILD TERRA CIDER was started.

Wild Terra Cider was the first urban cidery and cider bar in the state of North Dakota. With their proposed business model of serving their ciders along with other ciders to showcase the range and variety of cider plus beer and wine, this had never been done before. So, this meant that city ordinances and State laws had to be changed. After many trips to city council meetings and State legislation they achieved what was necessary to carry out their vision legally.

On an almost non-existent budget, they set out to find a building to meet their vision and finances. They found what at that point was essentially a derelict building in poor shape that had originally been a horse barn in 1905 and was eventually converted into a manufacturing shop in 1950. But by 2017 the building had been so neglected that it was in a state of disrepair

As a general contractor Ethan, upon signing the lease in February 2017, started immediately with the demolition and reconstruction of the building.

All of the salvageable wood and materials from the barn were removed, stored and repurposed in the build out. The taproom has a very unique historic feel while having the amenities of new construction. House plants, couches, and a shuffleboard table balance the rustic feel and provide that level of comfort that Ethan and Breezee strive for.

Opening the doors to the bar in December of 2017 Wild Terra served local and regional cider, as well as beer and wine to the community. In March of 2018, Wild Terra’s first commercial small batch cider was finally on tap!

They source fresh pressed juice from Washington year-round for their cider.

Every harvest season Wild Terra collects thousands of pounds of apples donated from the surrounding community to press and ferment into uniquely seasonal local cider.

Within one year they outgrew the fermentation area for their cider and began planning on an expansion for their production. In the summer of 2019, WTC began constructing a whole new space in the basement of the adjacent building. Having direct access to this space within the building including a heavy-duty freight elevator was key to the success of this new addition.

In December of 2019 the new production area was operational. Along with multiplying the fermentation capacity by 20 times they also purchased a canning line and started canning their cider offering them at offsite locations in the spring of 2020.

As lovers of art all of their cans feature different local artists of all varieties, graphic designers, muralists, tattoo artists, etc. They also focus on the environment with donations for carbon offsets and a plastic-less taproom.

Wild Terra Cider is committed to pursuing cider knowledge and being a leader of innovation not only in our community but nationally. We believe in using quality ingredients and pushing the boundaries of what the current perception of cider is, while honoring and staying true to the great history of cider drinking culture. 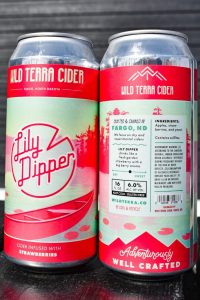 Approachable, easy drinking semi-sweet cider infused with strawberries. This is a go to for regulars and a crowd pleaser for new-comers. Fresh strawberry aroma and sweet juicy mouthfeel with a touch of acidity from the apples makes this cider a no brainer.  6.5% ABV 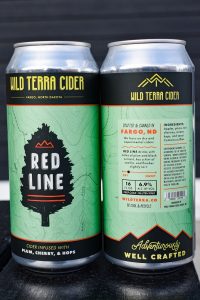 Cider infused with Plum and Tart Cherries and dry hopped with Ariana hops.  The plum puree gives this cider a jammy quality balanced with a punch of tartness from the red cherries. German Ariana hops gives a subtle hoppy aroma, notes of vanilla, black currant and spices on the palate.  6.9% ABV 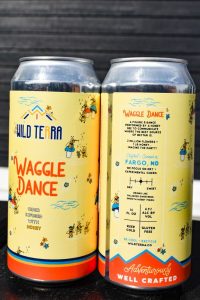 Cider infused with local honey.  A strong honey aroma and smooth mouthfeel. This cider is a great comparison to a semi-sweet white wine or mead. Tasting notes are vanilla and honey blossom.  6.9% ABV 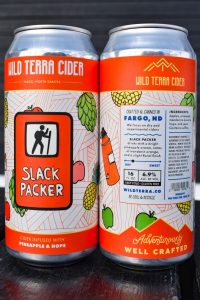