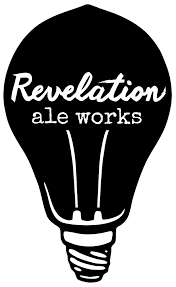 Revelation Ale Works was founded in 2017 in Hallock, MN by brothers Ryan and Josh Evenson and their wives Lindsey (Ryan’s wife) and Ashley (Josh’s wife).  Hallock is located in NW Minnesota, close to the Canadian border.  Although not being founded till 2017, Ryan had the idea to start a brewery for years before then.

Ryan lived in Oregon for a short period of time where he was introduced to craft beers and fell in love with the atmosphere of the breweries that brewed them.  Since that time, he had a dream of opening a brewery himself but assumed he wouldn’t be able to make it work for years down the road.  So, in the meantime he homebrewed and worked on recipes for beers.

It was in 2015 that Ryan found himself talking to the owner of the old 1939 Standard gas/service station building, which is located on a busy intersection in Hallock.  The owner of building was talking about tearing it down, so Ryan went out on a whim and offered him $100 for it and bought the building.  From there, it started snowballing into starting a brewery.

Ryan and his wife already knew it was something they wanted to do, and it didn’t take too much convincing to get Josh and Ashley on board as well.  They started working on getting funding to start the brewery, then moved on to renovating the building, which took more work than expected but in the end it all came together, and they opened their doors in February 2017.

For anyone who knows the town of Hallock or the surrounding area they would describe it as a humble small town surrounded by farmland.  With it being a low populated area, it is a bit surprising to think a craft brewery could flourish in that environment, but Ryan and Josh found a way to make it work.

To become profitable in their small town they came up with a business plan that was unconventional to most new breweries but worked out great for them.  That plan was to focus on being an “ultra-rural craft brewery” by getting craft beer to all the small towns in rural Minnesota where it’s usually tough to find good craft beer.  This plan has proven to be successful for them cause the demand for their beer keeps on growing.

At first, they expected to serve around 40-50 people a night in their brewery while being open a few days a week, but they soon found out that amount was underestimated because they were getting closer to 200.  Not only was the taproom a success from the get-go, but bars and liquor stores from Fargo, Grand Forks, Minneapolis, and even Winnipeg were asking for their beer.

With this early success they had to expand quickly because they didn’t have enough space or equipment to keep up with demand.  So, in 2018 Revelation purchased another building in Downtown Hallock where they were able to increase production, install a big cooler, and a canning line to further expand their distribution capabilities.  When they purchased this new location, they kept the taproom at the Standard Station building.

It took some time to get the new building up and running, but now that it is they are working on keeping up with the demand for their beer in the surrounding area while also eyeing increasing their distribution area.  Currently they are only distributing to Minnesota, North Dakota, and a small area in Canada.

Brewed with coriander, sweet and bitter orange peel, and LOTS of Blood Orange puree this Witbier is orange in color and bold in flavor. With over 20 pounds of blood orange added per barrel, this full textured Belgian had a unique flavor perfect on a warm summer day as well as a cozy winter night.  ABV: 4.8%  IBUs: 10