San Diego is home to one of the major craft beer movements in the United States and Ballast Point is one of the most popular if not the most popular from the San Diego area. Ballast Point has been growing at an exceptional rate since its inception in 1996 when it was founded by Jack White, Pete A’Hearn, and Yuseff Cherney.  But that isn’t where their story begins for Ballast.

But even homebrewing had its challenges in the San Diego area, for they had a tough time finding supplies for homebrewing and there was no network for other homebrewers to connect and trade thoughts and ideas. So, after college, in 1992, Jack opened “Home Brew Mart” in San Diego while Pete went off to the University of California, Davis to study brewing and get his master brewers certificate.

The Home Brew Mart became a popular place to get supplies and talk with other homebrewers about ideas. It also helped build the craft beer surge in San Diego and is linked to help starting a lot of other breweries in the area because those founders started off as customers at the Home Brew Mart.

In 1996 the three founded Ballast Point Brewing Company, brewing their beer out of the back of the Home Brew Mart. And it didn’t take long for business to start growing.  But soon after starting the company Pete A’Hearn moved on to teaching in the classroom but still working for Ballast Point as a brand ambassador in his free time.  By 2004 they had outgrown there back room brewery at the Home Brew Mart and built a production brewery in the nearby town of Scripps Ranch.

In 2013 Ballast Point opened a third location in San Diego’s Little Italy that served as a tasting room and restaurant, as well as a small “research” brewery where employees could experiment with special brews. Then in 2013 Ballast Point had exceeded the limitations of their Scripps Ranch Brewery and opened a fourth location in 2014 in Miramar.  And most recently, to expand their reach of distribution, they opened a fifth location on the east coast.  This newest addition was opened in 2017, located in Daleville, Virginia and serves as a brewery and tap room. 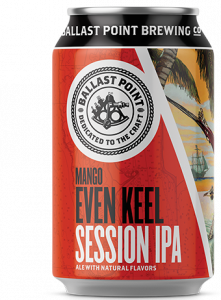 Ballast Point’s Mango Even Keel is the ideal beer for easy drinking. This hoppy, session ale gets a flavor boost from mango, which perfectly plays off the citrusy hop bouquet. With fruit, hops, and a low ABV, this beer truly is on another level.   ABV: 3.8%  IBUs: 4 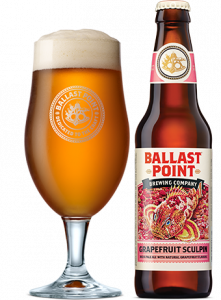 The Sculpin is the most popular beer in Ballast Point’s lineup by a wide margin. So, with its popularity Ballast Point also makes different versions of the Sculpin which include an Unfiltered Sculpin, Habanero Sculpin, Pineapple Sculpin, and the one we have here, the Grapefruit Sculpin.  The Grapefruit Sculpin pours a hazy golden tangerine and has aroma of mainly grapefruit and some underlying citrus.  The flavor is juicy fresh grapefruit up front that leads to citrus hops.  A perfect blend of sweetness and bitterness to have your taste buds longing for another sip.  ABV: 7.00%  IBUs: 70 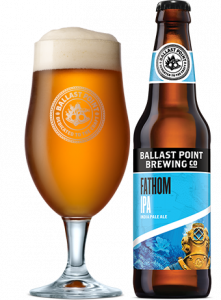 Fathom IPA highlights Ballat Point’s favorite characteristics of the west-coast IPA style. This crisp and clean brew features a touch of malt on the surface with an ocean of zesty orange and piney hops below. The result is a refreshing, easy drinking IPA with just the right amount of depth.  ABV: 6%  IBUs: 50