When it comes to making great beer, being in a highly populated area isn’t a necessity.  Just ask Toppling Goliath who was RateBeer’s second-best brewery in the World in 2015 according to their annual list of “Best Brewers in the World”.  Toppling Goliath is located in the small town of Decorah, Iowa that has a population of just under 8,000 and is an hour and a half drive South of Rochester, MN.

Toppling Goliath was founded in 2009 by Clark Lewey and his wife Barbara.  Clark had spent the previous 24 years as a merchandising equipment supplier for beverage companies and breweries.  Through this line of work, he grew to love beer and although he loved his hometown of Decorah, he wasn’t happy with the lack of good beer in town or nearby.  This led to Clark dabbling in homebrewing.

After spending some time homebrewing and seeing the need for good beer in his hometown Clark decided to leave his full time job to start a brewery.  He opened Toppling Goliath Brewing Company in 2009, but he tempered his expectations because he didn’t know how Decorah would react to his beers which were bigger and bolder than the traditional beers drank in the area.  Clark started off small so if the brewery didn’t go over well with the town of Decorah, he wouldn’t lose too much.

Surprisingly though, a few years after opening and winning awards for some of his beers Toppling Goliath not only became popular in Decorah, but also started to become well known nationally, to the point of being crowned the Second-Best Brewery in 2015.

This notoriety brought in more demand for Toppling Goliath beer, so they did their best to keep up.  Once they maxed out production at their brewery, they moved on to contract brewing with Brewhub in Florida.  They had Brewhub brew their four flagship beers while they brewed the rest of their beers at the brewery.  While doing this they expanded distribution to more states in the Midwest and South East.

The contract brewing lasted from 2015 through 2017 when Toppling Goliath decided it was time to open a bigger brewery to handle all aspects of their brewing process.  In early 2018 they opened a brand new 52,000 sq. ft. facility that houses a brewery with a 100-barrel brewing system, packaging line, and a two-floor taproom/restaurant that has room for 1,300 people.  This new brewery has helped them expand distribution to 20 states with more envisioned for the future.

Currently Toppling Goliath has 3 beers in RateBeer’s “Top 100 Beers in the World” and their Kentucky Brunch Brand Stout is rated No. 1 overall by both RateBeer and Beer Advocate.  But good luck on getting your hands on one.  It’s released once a year only at the brewery during a huge release party that is tough just to get tickets to the event.

For the future, Toppling Goliath is looking at opening a brewery on the West Coast to increase their distribution area.  Also, Clark recently assisted in getting legislation passed that will allow breweries in the state of Iowa to also distill spirits, which Toppling Goliath plans to do.  They have enough room on their lot that the brewery stands on to put up a building for their spirits project. 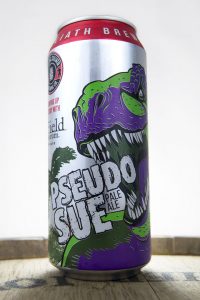 This single hop pale ale showcases the Citra hop for a well-balanced beer that is delicate in body with a mild bitterness in the finish. She roars with ferocious aromas of grapefruit, citrus, mango and evergreen. Pseudo Sue’s unique taste is clean and bright with just enough bite!   ABV: 6.8%, IBUs: 45

This IPA is created with the same attention to detail as the beautiful mosaics that graced the walls of prominent buildings in the city of Pompeii. It features mango and pineapple hop flavors with a medium-body feel to tantalize the senses.   ABV: 6.2%, IBUs: 50 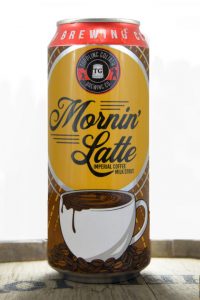 Mornin’ Latte is an Imperial Coffee Milk Stout brewed with lactose and a careful blend of cacao nibs and aromatic coffee to emulate an Iced Mocha Latte. This delicious beer asks you to slow down, pour a glass and enjoy the moment.  ABV: 8.9%, IBUs: 20