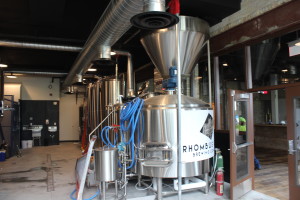 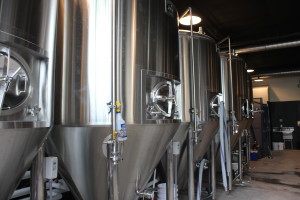 Happy Harry’s is proud to present North Dakota’s newest AND Grand Forks’ first brewery!  The project took owners Matt Winjum and Arron Hendricks eighteen months to get up and running and has been open to the public since September 24, 2015!

All of their beers are currently only on draft, but they plan on having  their canning line up and running in the near future.  You will start seeing their brews popping up at your favorite pub soon, if not…just ask!  If you can’t wait, you can visit their awesome brew pub in Grand Forks!

The following is from owner, Matt Winjum:

We purchased the old Metropolitan Opera House in the summer of 2013 with the hopes of fulfilling a dream.  Arron and I have always wanted to own a brewery, even before the pizza shops.  It 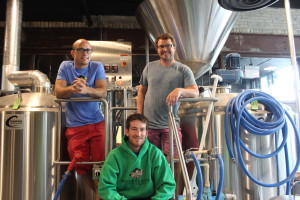 has been the largest undertaking of our lives, but we are thrilled with the results.  We started with a feasibility study, then a design phase, and then the construction aspect took place.

In January of 2015, Chad Gunderson joined the team as our Head Brewer.  He brewed on a 10 gallon pilot system for us all the way up until July, when he was able to transition to the new brewhouse.  We tested a lot of recipes over that time period, and we are very proud of the beers that have come out of it and made the lineup.

We are currently operating on a 15bbl brewhouse with five 30bbl fermenters and one 30bbl brite tank.

Three different beers are in fermentation currently and should be tapped in a few weeks.

“Our goal is to make great local beer that the region can be proud of and enjoy as much as we do”!

Easy drinking and approachable, The Iconic Blonde Ale is brewed with North Dakota grown 2-Row malted barley, a touch of Honey Malt, and the finest Pilsner Malt. This is accompanied by a small dose of American grown hops which produces a clean, light, well-balanced, thirst quenching beer. It’s tall, it’s blonde, and I’ll take another. 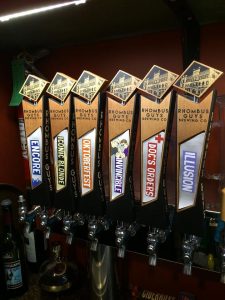 Light but cloudy, Doc’s Orders is an unfiltered American wheat that is the perfect cure for what ales you. Brewed with North Dakota grown 2-Row malted barley, malted white wheat, crystal malt and a splash of American grown hops. This beer will have you reaching for another dose of Doc’s Orders.

Citrusy with a hint of malt, The Illusion Amber Ale is a well-balanced, medium bodied beer. Brewed with North Dakota grown 2-row malted barley, Munich malt, Crystal malt and finished off with a simple helping of Pacific Northwest Hops. We are confident this will not be the last time you reach for our Illusion Amber ale.

Pale in color and refreshingly hoppy, this pale ale is a perfect balance of malt and hops. Brewed with North Dakota grown 2-row malted barley, ESB malt, Munich malt, Crystal malt and topped off with a pronounced quantity of Pacific Northwest Hops. Floral, citrus and tropical tones of grapefruit will leave you with an aromatic experience.

Decidedly hoppy and bitter, Encore India Pale Ale will cloak your pallet with citrus, floral, and piney flavors. Brewed with North Dakota grown 2-row malted barley, Crystal malt, and it’s crowned with a distinct quantity of Pacific Northwest Hops. After a sip of Encore IPA, you can’t help but yell, “Encore…Encore…Encore!!” Sit back and enjoy one more.

Dark and mysterious, Into the Darkness Porter is a smooth blend of dark malts that brings out chocolate and coffee notes to your fancy. Brewed with North Dakota grown 2-row malted barley, Crystal malt, German Chocolate Malt, a touch of flaked barley, and a liberal helping of American grown hops to round it off. A few of these and slip into the night. . .

A true German Märzen style lager, most commonly referred to as an Oktoberfest. Light and malty, with a hint of hops. Brewed with North Dakota grown 2-row malted barley along with Germany’s finest Munich Malt and finished off with German grown hops. Put on your Lederhosen… Raise your mug and be merry because it’s OKTOBERFEST!!!!!