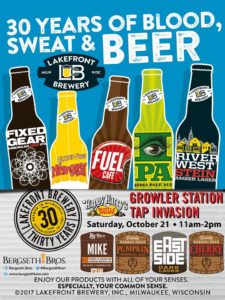 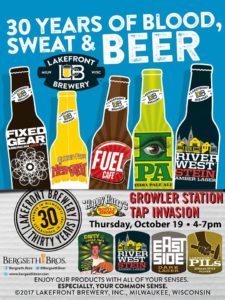 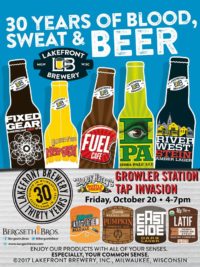 When Russ Klisch bought a home brewing book for his brother, Jim, on his birthday as a gag gift; he didn’t actually expect his brother to read it and brew his own beer.  And to Russ’s surprise, the beer was pretty tasty.  Russ decided if his brother could brew that, then he could brew one better.  It led into a shared hobby between the brothers where they were winning awards at home brewing contests.  Eventually their family talked them into turning their hobby into a business.  A product of sibling rivalry, Lake Front Brewery is located on the Milwaukee River in Milwaukee Wisconsin.

The two brothers started their brewery in 1987, originally located in an old bakery building using old factory equipment, revived as brewing equipment.  By 1998 they had gained notice from their community as well as other parts of the Midwest and needed a new home for the brewery as they could not keep up with demand at the bakery.  The city of Milwaukee had been contemplating tearing down the building that housed the Milwaukee Electric Railway and Light Company’s coal-fired power plant since 1908.  Instead, the Klisch brothers purchased the building to be the new home for their brewery.

In 2000 they opened their new brewery equipped with brand new brewing equipment, moving on from their makeshift operation that they had at the bakery.  Lake Front has since become a notable business in the Milwaukee community.

Since opening, Lake Front has been an innovative brewery.  In 1996 they were the first brewery to make a beer that was certified organic in the U.S.  It was made with 100% organic malt and hops grown in their home state as part of a partnership Russ had created with local farmers.  In 2004 the USDA started to allow brewers to have an organic beer without using organic hops.  Soon after Lake Front, along with some organic farmers and other breweries fought this decision and convinced the USDA to change the policy back to require organic hops to be certified organic.

In 2006 Lake Front created the new category of gluten free beer recognized by the government.  Before, beer had to include barley, but with so many people being celiac Lake Front wanted make a beer for them to enjoy.  Even before it was recognized as a beer, Lake Front had been brewing New Grist, their gluten free beer, since 1996.  It is made up of water, rice, sorghum, hops, and gluten free yeast grown on molasses.

Lake Front was also one of the first brewers of pumpkin beer, using an old recipe of Thomas Jefferson’s.  They were even the first or one of the firsts for brewing a fruit beer since prohibition when they brewed their cherry lager, which is now a seasonal brew that is highly sought after. 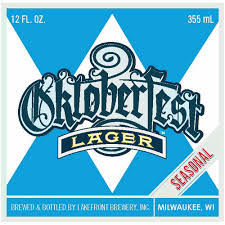 The Oktoberfest pours a dark orange but clear color and carries aromas of bread, spice, and toffee. When consumed the initial taste is caramel and vanilla that then leads into bread, toffee, and sweet malts.  Lakefront did a great job with this Oktoberfest as it embraces the true style of an Oktoberfest and has plenty of great flavors to balance it out and is a very drinkable beer. ABV – 5.8%, IBUs – 14. 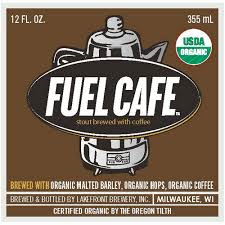 The Fuel Cafe Stout pours out to a deep dark color with strong coffee on the nose. Coffee is also noticed right away with the flavor accompanied by roast, and rich chocolate.  It has a medium body making it fairly easy to drink.  ABV – 6.4%, IBUs – 18 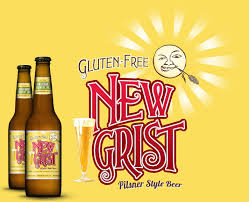 New Grist is their gluten free beer, brewed with rice and sorghum instead of barley allowing people with celiac disease to drink beer. It is made it in the style of a pilsner and looks like one once poured into a glass with a very light gold/yellow color.  It has a very mild smell of fruit and hops.  The taste is crisp, like a dry cider, with flavors of apple and earthy hops.  New Grist is a very easy drinking beer with a clean finish.  ABV – 5.1%, IBUs – 15

FOR MORE INFO ON LAKEFRONT BREWING AND TO SEE THEIR FULL LINEUP, VISIT: http://www.lakefrontbrewery.com/