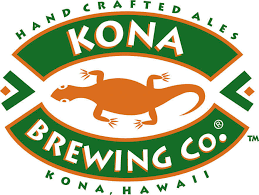 Kona Brewing was created out of the love of beer and the need for better tasting island beer in Hawaii. Kona was started by father and son duo Cameron Healy and Spoon Khalsa back in 1994.  They set up shop in an old newspaper press room in Kailua-Kona on Hawaii’s Big Island.  Their first beers were introduced in 1995, Big Wave Golden Ale and Fire Rock Pale Ale.

Business was tough for the first few years trying to get noticed by natives and tourists in Hawaii even though they were the only brewery on the islands.  Even with tough business they still were determined to become a popular brand and opened Kailua-Kona Pub in 1998, a brew pub where they serve traditional island dishes and Kona beer.  Finally, with the brew pub, they started to get recognition and started to turn a profit.

Since then it’s been all uphill from there.  By 2000 Kona was one of the 10 largest microbreweries in the U.S.  In 2003, they opened their second brew pub at Koko Marina Center in Hawaii Kai in East Oahu.  Then, in 2010, the Kona Brewing Company was purchased by the Craft Brew Alliance.

The Craft Brew Alliance is an alliance between 5 breweries (currently), Widmer, Redhook, Omission, Kona, and Square Mile Cider.  They have multiple breweries throughout the states to increase distribution of fresh beer across the entire U.S.  Their breweries are located in Portland Oregon, Woodinville Washington, Memphis Tennessee, and Portsmouth New Hampshire.  The Craft Brew Alliance also is 33% owned by Anheuser-Busch allowing them to use one of the best distribution networks.

Kona beer is produced at all 4 of the Craft Brew Alliance’s breweries to distribute fresh Kona beer to all 50 states (and 26 countries), lower shipping costs, and to decrease their carbon footprint.  Even though Kona beer is brewed at multiple breweries, Kona’s Head Brewer ensures that every brewery is following every detail of brewing Kona Beer to ensure the same great tasting beer across the States.

Kona is also a big backer of sustainability, where they make it a focus to put as little strain on the environment as possible.  Examples of this include finding ways to use or recycle all their waste, and in 2010 they installed a solar energy generating system on their roof of their Hawaii brewery to power 60% of its brewery. 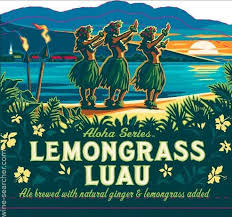 Kona’s Lemongrass Luau is their Spring/Summer seasonal that is an “ale brewed with ginger and lemongrass with ginger added.” It pours straw yellow in color with the obvious aromas of ginger and lemongrass, but also has a hint of herbal and grassy hops.  The taste is very refreshing with mostly lemon and ginger on the palate with a hint of wheat bread.  This beer is a fantastic summer beer that will bode well with fruity or funky beer drinkers. ABV – 5.0%, IBUs – 20.  Beer Advocate: 81 points – good. 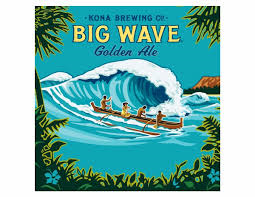 Kona’s Big Wave is one of their most popular beers, and is one of the two beers that they have brewed since the start in 1995. It pours a golden yellow with a slight haze and carries mild aromas of apricot, grass, malt, and hops.  The taste is the same of most golden ales; it’s light with some malt and hop notes with a hint of lemon.  Although it carries the general golden ale flavors it stands out to me as one of the most balanced and refreshing golden ales I have ever had.  Bring this with you to your summer adventures and you will not have buyer’s remorse. ABV – 4.4%, IBUs – 21.  Beer Advocate: 81 points – good. 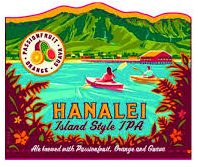 Kona’s Hanalei Island IPA is one of their newest additions to their line of beers that is an IPA brewed with Passionfruit, Orange, and Guava. It pours a translucent golden orange with the passionfruit, orange, and guava noticeable on the nose with moderate floral hops and toasted malts in the background.  The taste starts off with mild floral and citrus hops but is soon balanced out by the tropical fruitiness of the passionfruit, orange, and guava.  Overall the Hanalei makes for a great summer IPA with enough bitterness to satisfy a hop craving with fruitiness to keep you refreshed on those hot days.  ABV – 4.5%, IBUs – 32.  Beer Advocate: 83 points – good.

TO LEARN MORE ABOUT KONA BREWING AND TO SEE THEIR FULL LINE-UP, VISIT: konabrewingco.com