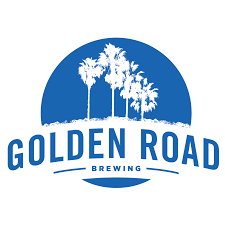 The story for Golden Road, which was founded in 2011, starts well before that with Meg Gill, one of the Co-founders of Golden Road.  Meg went to college at Yale as an athlete but also worked as a senior manager for Associated Student Agencies that provided support for student-run businesses.  From this she gained business knowledge that would later come in handy when starting Golden Road.

After college Meg moved to Boulder, Colorado to become a professional triathlete.  But that wasn’t enough to live on, so she spent some time coordinating events, which eventually led into her joining the Oskar Blues Brewing Company team where she worked as a regional sales manager.  Through all this she slowly gained knowledge and developed relationships with people of the beer brewing and distribution world.  Meg began to find a love for the craft beer business and eventually wanted to open a brewery of her own.

A few years later Meg met Tony Yanow, a bar owner in L.A. who shared the same ambition at opening a brewery.  Seeing L.A. as a prime spot for a craft brewery, given that the market was undersaturated with craft breweries, they pushed forward in opening their own brewery there.  In 2011 they founded and opened Golden Road Brewing.

Meg was able to use her knowledge and contacts on the distribution side to get their beer into the market faster than most.  She also worked relentlessly day and night to get her beer out to as many consumers as possible.  All this hard work paid off and they quickly grew their brewery and demand.  From 2013 to 2014 they were able to double their sales from 15,000 barrels to 30,000 barrels.

This growth didn’t go unnoticed though.  Anheuser-Busch InBev approached Golden Road in 2015 with an offer to purchase their brewery.  The offer was too good to pass up to which Meg and Tony decided to sell.  Fortunately, the deal allows Golden Road to continue “business as usual” but they get to use AB’s distribution to get their product to more markets.  With this buyout Golden Road joins AB’s craft beer portfolio called “High End” where they join other breweries like Goose Island, Kona, 10 Barrel, and more.

Hoppy and refreshing, Wolf Pup is Golden Road’s riff on a Session IPA. Highly drinkable with a wildly aromatic tropical and citrus character, it’s the perfect companion to keep on sippin’ for those long, sunny days. 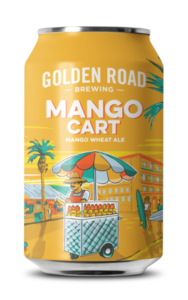 First in a series inspired by the iconic fruit cart vendors of Los Angeles. A light Wheat Ale bursting with lots of fresh mango flavor and aroma, finishing crisp and refreshing. 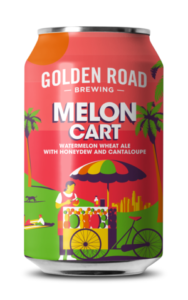 Second in a series inspired by the iconic fruit cart vendors of Los Angeles. Tastes like freshly cut Melons and the California sun right in your hand. This light, crisp Wheat Ale is bursting with Watermelon, Honeydew, and Cantaloupe flavors, finishing bright and refreshing.