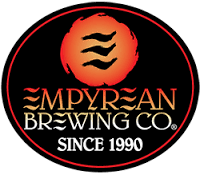 In ancient folklore Empyrean is regarded as the highest heaven, supposed by the ancients to contain the pure element of fire, located at a paradise at the pinnacle of the universe in the form of a fiery sphere. The folks over at Lazlo’s Brewery and Grill thought that Empyrean would be a perfect fit for the name and logo of their brewery.  Lazlo’s was founded in 1990 in Lincoln as Nebraska’s first brewpub and Rich Chapin was brought in as the head brewer where he brought in his award winning homebrew recipes.

Lazlo’s soon became a popular establishment, mostly because of the delicious beer they were brewing. Their beer became so popular that they decided to start distributing it.  In 1997 they opened up a brewery across the street and started Empyrean Brewing Company as a separate financial entity.  Empyrean started with only distributing their beer in kegs to bars and restaurants in Nebraska and had 70 accounts a year after opening.  By 1999 they brought in a bottling line and sold their packaged beer to liquor stores as well.

Since the folklore of the empyrean heavenly paradise is located in space, Empyrean Brewing Company names all of their beers with some kind of space/cosmos reference with fitting artwork as well. Empyrean Brews seven different year round beers, and seven rotating seasonals.  In 2013 they started brewing their Carpe Brewem (which means ‘Seize the Beer’) series which features hand-crafted small batches of unique beers that have limited availability.

Empyrean’s Dark Side is a Vanilla Porter infused with Madagascar vanilla beans. It is a deep porter with scents of chocolate and vanilla.  The flavor starts off with the chocolate, vanilla, and malt with a roasted coffee undertone.  Overall Dark Side is a great, smooth, easy drinking porter with a lot of flavor to quench that porter craving.  ABV – 5.7%  IBUs – 23

Burning Skye is Empyrean’s Scottish Ale that is one of their year round beers. It is a copper amber color and carries an aroma of malty sweetness, a hint of spice, and scotch.  The flavor is a great combination of caramel malts, spice, toasted bread, and a light scotch finish.  Overall it is a lighter Scottish ale, but still has enough flavor to make you want another.  ABV – 5.3%  IBUs – 13

Empyrean’s Imperial Mango IPA is part of their Carpe Brewem series. The Imperial Mango IPA gets the imperial in the name from doubling the amount of hops used to make the beer.  It is also infused with sweet mangos that calms the increased hoppines making a complex and thirst quenching beer.  It pours a reddish gold color with aromas of tropical fruits, citrus, and sweet mangos.  The flavor is striking, the sweetness from the mango meshes perfectly with the amped up hops, making the beer refreshing while taking your taste buds on an extravagant adventure.  ABV – 7.8%  IBUs – 90