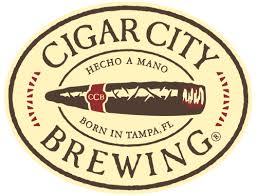 Founder/Owner Joey Redner worked as beer sales representative and beer writer in the Tampa area in the 1990’s into the 2000’s. With this passion for great beer he decided it was time he tried his hand in making some great beers that other people would write about. So, in 2007 Cigar City Brewing was born out of Redner’s desire to bring the culture and history of Tampa to an international audience.

After a location on Spruce Street was selected in early 2008, Redner began searching for a brew master to help bring his vision to life. He found that partnership in Wayne Wambles, an experienced brew master that also understood the flavors of the Southeast, being a Native Alabaman. After a year of getting the building and brewery ready, Cigar City produced its first full 465 gallon batch of Maduro Brown Ale. This beer was well received and the partners went to work increasing there beer portfolio, quickly adding their flagship IPA Jai Alai, as well as their highly sought after Mole Inspired Imperial Stout Hunahpu’s. These beer were not only recognized locally as high quality brews, but nationally the brewery started to create some buzz.

After a multitude of awards including medals at the Great American Beer Festival, Cigar City was asked to join forces with a larger conglomerate known as CANarchy, a Colorado based company that specializes in getting great craft beers out on a national level. This helped Cigar City expand into new markets, including North Dakota in the spring of 2020. 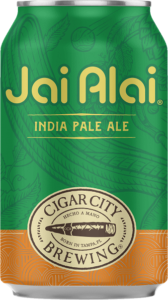 The Name for this beer comes from a sporting event Native to the Basque region of Spain, the game of Jai Alai involves players launching a ball from a curved mitt called a cesta in an attempt to outsmart and outmaneuver their opponents on a court called a fronton. Native to Tampa, Florida, Jai Alai IPA is a bold, citrusy and balanced India Pale Ale that involves six different hop varietals used generously in a 7.5% ABV beer. This beer packs a prominent hit of hops up front, but finishes with a slight citrus note but without too much sweetness. 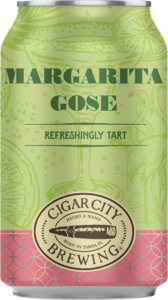 Throw on your Hawaiian shirt and your lederhosen and meet Cigar City Brewing at the intersection of traditional German brewing and tropical relaxation. Cigar City took their German-style Gose, an ancient style of moderate alcohol beer brewed with salt, and given it the coastal treatment by adding orange peel and lime essence to create the perfect warm weather ale. The slight bit of sour that comes form this Gose, is perfectly complimented by the sweetness from the lime and orange that’s used to mimic a margarita. No rimmer of salt needed. 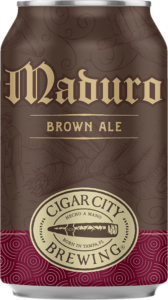 Among the darkest colored and most complex cigars made in Tampa’s Ybor City is the Maduro, made with an overripe wrapper and exhibiting chocolaty and earthy flavors. Inspiration came from these sophisticated cigars and from Tampa’s cigar-making history with Maduro Brown Ale, a Northern English Brown Ale brewed with flaked oats. Full in body and silky on the palate, Maduro Brown Ale’s chocolate and espresso notes are rounded out by toffee-like qualities and a light woody hop presence. Enjoy Maduro Brown Ale with chicharrones, ropa vieja, or a fine hand-rolled cigar. 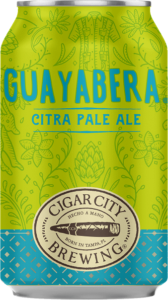 Traditional throughout Latin America, the Guayabera shirt combines style, functionality, form and tradition in its four-pocketed design. Cigar City Brewing feels the same reverence and appreciation for the Guayabera that we do for the Citra hop varietal, an ingredient that imparts notes of tangerine, lime and berries to this traditional American Pale Ale. The exclusive use of Citra hops in this beer creates a flavor that’s at once unique and recognizable, while its dry, crisp character and moderate alcohol make it as refreshing and functional as a crisp linen Guayabera.

For more info on Cigar City Brewing, be sure to visit: cigarcitybrewing.com