The origins of Blake’s Hard Cider Co. goes back all the way to 1946.  At this point in time Gerald and Lovey Blake decided to leave the city and try their hand at farming, so they started Blake’s Cider mill in Armada, Michigan where they also raised 13 children.  Two of those children, twins Paul and Pete, returned to the farm after going to college at Michigan State.

Paul and Pete have since taken over the Cider Mill which has grown into a fun family tourist attraction.  Their busy time is during harvest season where people come to pick apples and other fruits and vegetables, go on hayrides, partake in Halloween celebrations, cut down Christmas Trees, and enjoy warm cider and donuts.  This way of business works well for them when they have a good harvest, but it can be troublesome when they have bad harvest year because it yields poor profits.  But Paul’s son Andrew came up with a new business venture that helps mitigate the bad harvest years.

Andrew returned home to the farm from college at Michigan State in 2011.  At that time, he had an idea of starting a hard cider company but needed the blessing of his dad and uncle.  So, Andrew started experimenting with some recipes first before he pitched his idea but once he had some down, he brought up the idea of hard cider.  Paul and Pete were reluctant at first but after a poor harvest in 2012 Andrew was able to convince them that the hard cider venture could help.  Andrew explained to them that it could lessen the punch of bad harvest years, increase profits year round instead of only being profitable in the fall, and also keep families coming back to the farm that have kids that grew out of the younger activities that the farm has to offer.

In 2013, Paul, Pete, and Andrew opened Blake’s Hard Cider Co. but with a hesitant toe in the water approach.  They were unsure how their market would react and set their expectations low, only thinking they would produce 15,000 gallons of hard cider in their first year.  But they quickly found out that their cider had more demand than they were expecting with producing 65,000 gallons in the first year to keep up.

Business was booming more than they could’ve imagined, and bars, restaurants, and liquor stores were asking for their cider everywhere.  In 2015, they spent $1.2 million for an expansion that increased their production area 12,000 sq. ft. and added 10 new stainless-steel fermenting tanks.  Then again in 2017 they spent another $2 million adding another 37 more tanks and increasing their square footage to 40,000 which is quite the leap from the 200 sq. ft. they started with when starting the hard cider company.  With these expansions, Blake’s has increased their distribution footprint to 18 states, and they are still looking at where to expand to next. 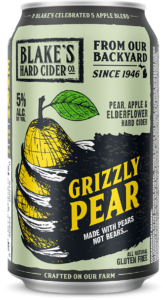 Grizzly melds soft notes of pear balanced with a sharp apple finish with a hint of Elderflower. No bears were harmed in the making of this product.  ABV: 5% 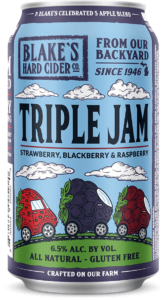 Inspired by the juicy berries Blake’s grows on their farm each summer, Triple Jam is the perfect balance of ripe sweetness with bold fruit aromatics. Bursting with strawberries, blackberries, and raspberries, this semi-sweet captivates the nuance of their farm, in each and every taste.  ABV: 6.5% 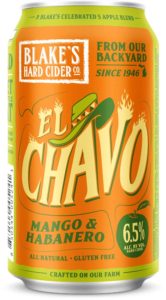 Blake’s Hard Cider Co., likes to spicing things up. That’s why they put dimmers on the lights in our Cider House. And it’s why they created this sweet, heated blend of habanero pepper, mango and our famous Blake’s apples. Experience a hard cider that’s really, honestly, truly like no other.  ABV: 6.5%