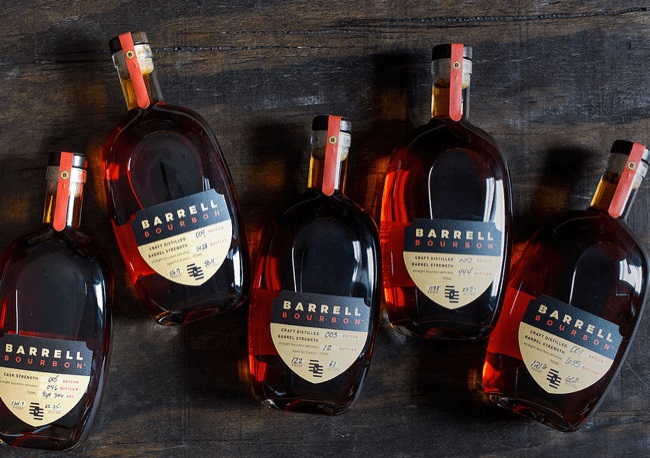 Barrell Craft Spirits, based in Louisville, Kentucky, is an independent blender and bottler of unique aged, cask-strength sourced whiskey and rum spirits. They conceive of, design, launch, and talk about Spirits with a focus on what people want now and not what has been successful in the past. This affords them access to some of the most interesting and delicious spirits in the world.  Barrell Craft Spirits goal is to blend products that explore different distillation methods, barrels and aging environments, and bottle them at cask strength. Every batch is produced as a limited release and has an intentionally distinct flavor profile.

Our first deliver will arrive this week and will include the following releases:

Batch 17 is Bourbon Whiskey that was distilled and aged in Tennessee, Indiana and Kentucky.  This selection is a blend of 10 year – 4 month, 14 and 15-year-old barrels, crafted and bottled in Kentucky at 112.5 proof cask strength.  Mash Bill: corn, rye and malted barley.

TASTING NOTES:  An autumnal nose of mulled cider and cherry pie leads to an unexpectedly complex and tropical palate. Steely minerality lends tension to a whiskey that is at once rich and delicate.

Batch 15 is a Bourbon Whiskey distilled and aged in Tennessee and Kentucky. This selection is comprised of selection of 9.5, 10 and 11-year-old barrels. Crafted in Kentucky and bottled in Kentucky at 107.6 proof cask strength. Mash bill: corn, rye and malted barley.

Batch 13 is a Bourbon Whiskey distilled and aged in Tennessee and Indiana​​.  Batch 13 is a selection of 5 and 8-year-old barrels​ aged in American white oak barrels.  Bottled at 113 proof cask strength.  Mash bill: corn, rye (high and low), malted barley

Tale of Two Islands is a Jamaican pot still rum,  distilled and aged in Jamaica for 8 years.  Finished in Islay whisky casks and bottled at 132.8 proof cask strength.

TASTING NOTES:  With bright tropical notes, dark molasses undertones, and a mysterious hint of peat and smoke, Barrell Tale of Two Islands Rum is intense and deeply layered. With separate distillation, aging, and finishing influences from Jamaica, Kentucky and Islay, this is a truly unique and limited Spirit.

The tradition of keeping an infinity bottle is well known to whiskey collectors and aficionados around the world. Take the last ounces of each whisk(e)y bottle as you finish it, and pour them into a bottle you’ve set aside.  Barrell’s Infinite Barrel Project does the same thing, but on a much larger scale. They remove a portion of whiskey and replace it with other barrels that will complement the remaining blend. They then repeat the process – bottling a portion and adding newly selected whiskeys each time.

To celebrate the New Year, they create a new Barrell Bourbon New Year Limited Edition. It’s comprised of reserves from some of their batches and other choice barrels coming from 6 distilleries in 6 states. Throughout the year they set aside particularly inspiring barrels that they believe will make an interesting contribution to the New Year release.

The 2019 release is a selection of 5, 8, 11, 14 and 15-year old straight bourbon whiskeys that were distilled in Tennessee, Kentucky, Indiana, New York, Texas and Illinois.  The 2019 release was crafted and bottled in Kentucky at 112.1 proof cask strength.

TASTING NOTES:  The nose is greeted by a fully laden dessert cart, resplendent with assorted dried fruits and nuts, chocolates, and other confections. On the palate, rye grain delivers a complex and harmonious blends of herbs and spices.

Rye Batch #2 is the second release that expands on Barrell’s interpretation of a traditional rye whiskey, combining two very diverse ryes. They selected barrels of a 100% malted rye distilled and aged in Poland for 5 years in new charred #3 oak barrels from World Cooperage. We then blended it with an Indiana high malted barley rye that was aged in Indiana and Kentucky for over 5 years.

This complex 15-year-old bourbon was blended and bottled at peak maturity so you can experience its true flavor. It is a perfect union of grain and barrel, with an old, oaky nose and a deep, honey- maple palate that reveals the lushness of the grain.  Named by Fred Minnick as Best American Whiskey 2018!  If you are curious who Barrell beat out at second place…it was juggernaut William LaRue Weller!

Distilled and aged in Tennessee, Kentucky and Indiana.  Crafted and Bottled in Kentucky at 105.1 cask strength.  Mash bill: corn, rye and malted barley.

TASTING NOTES: After hitting the palate like a shock wave of flavor, the notes reappear with grace and nuance.  Flavor comes in bold and elegant waves. This complex beast – just a flat-out butterscotch bomb – would rival any whiskey in the world.

VISIT BARRELL CRAFT SPIRITS WEBSITE FOR MORE GREAT INFORMATION ON ALL THE PRODUCTS THEY PRODUCE: