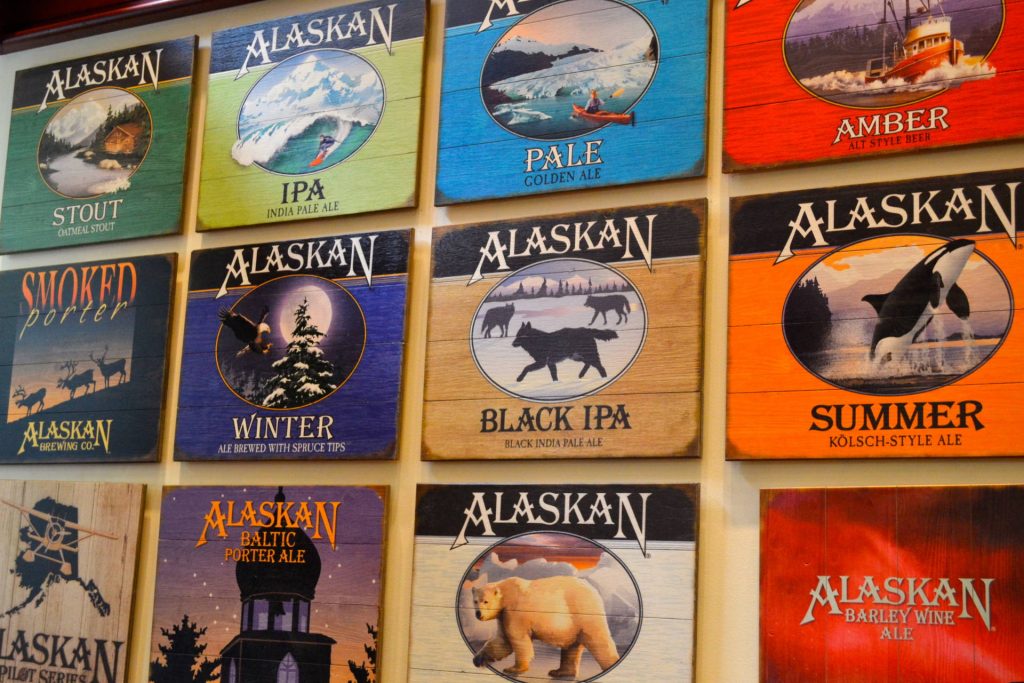 Back in the Gold Rush era, Alaska had plenty of breweries to quench the thirst of all of the gold diggers. It was the only way to get beer back then because shipping it from the rest of the states would have taken too long.  But then prohibition came and shut all of the breweries down.  It wasn’t until 1986, 53 years after prohibition, that a brewery was opened in The Last Frontier.

Geoff and Marcy Larson met in Alaska but both moved there separately, seeking adventure and beautiful nature, where there is more than enough of each in Alaska. The adventure, great people, and great atmosphere kept them there. But they had to make a living somehow and that was when their friends talked them into opening a brewery.  Geoff, being a chemical engineer and homebrewer, and Marcy, an adventure-seeking accountant and aspiring bush pilot, used their unique skill set to open and run Alaskan Brewery Company in Juneau, Alaska.

They started off small but over the past 30 years they have grown to be the 20th largest craft brewer as of 2014.  One of the major factors to their growth was Marcy finding old shipping records that contained ingredients for Douglas City Brewing Company (1899-1907).  She also found a newspaper article that talked about their brewing process as well.  Geoff and Marcy used this information to replicate and recreate the beer.  They found this beer to be delicious so they named it Alaskan Amber and it became one of their first beers sold to the market.

Since The Last Frontier is quite different from the rest of the United States, Alaskan Brewing Company has had to come up with some different ways to run their brewery in order to become profitable and self-sufficient. First off, Alaskan Brewing Co. was the first brewery to put in a CO2 recovery system which allows them to reuse the CO2 that is produced in the fermentation of the brewing process.  This has allowed them to not release Carbon Dioxide into the atmosphere as well as saving them money since they haven’t had to purchase any CO2 since putting the system in.  Second, in the brewing process, spent grain is left over after every batch of beer brewed.  Usually brewers sell this spent grain to farmers to feed their cows, but there are no cows in Alaska.  So Alaskan Brewing Co. found a way to turn the spent grain into fuel to create steam that is used in the brewing process.  Those are just a couple of examples of how Alaskan Brewing Co. has innovated their brewery to survive in the cold tundra of Alaska. 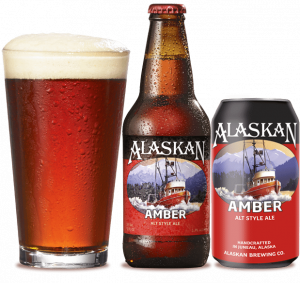 The Alaskan Amber is what put Alaskan Brewing Company on the map. It was their first beer and they got the recipe from the times of the pre-prohibition gold rush era.  The Alaskan Amber is richly malty and long on the palate, with just enough hop backing to make it a very well balanced and drinkable beer.  This beer can be enjoyed by all beer lovers; it isn’t overwhelming in flavors for those who don’t like bold in your face beers, but still has enough flavor for the craft beer drinkers to find enjoyment in it.  ABV – 5.3%  IBUs – 18 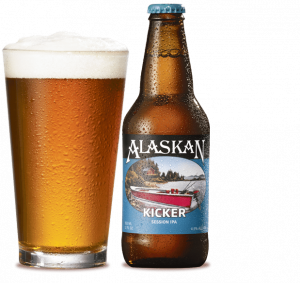 The Kicker has a hop-dominant citrus aroma to it, but don’t let that fool you. Being a session IPA makes this beer very drinkable and thirst quenching.  The flavor definitely has hops that carry a fruity characteristic, but it’s not overwhelming in bitterness.  You also get a light caramel or toffee malt background.  This is a great Session IPA that will have you coming back for more.  ABV – 4.5%  IBUs – 45 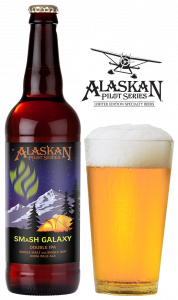 The SMaSH Galaxy is part of Alaskan’s Pilot Series beers, which are limited edition specialty beers that usually come in single 22oz bottles. SMaSH stands for Single Malt (Pacific Northwest Premium Pilsner malt) and Single Hop (Australian Galaxy Hops), which is a minimalist approach at brewing beer.  Most of the time complexity is what is praised in the craft beer world, but simplicity also draws popularity as well.  SMaSH Galaxy has an intense balanced aroma of passion fruit, guava, and herbal notes.  The initial flavor you taste is tropical fruits that then leads into herbal notes.  ABV – 8.5%  IBUs – 86